The formation of the 4616 Seleyan Union Assembly was the selection of representatives from each of the 8 Seleyan Union member states. 15 seats were allocated to each member state, states then allocated seats to national parties using a proportional system based on that nation's most recent election results.

This was the first Seleyan Union Assembly formation since the accession of Saridan to the Seleyan Union in 4615, adding an additional 15 seats to the Assembly and increasing the total available to 120. The result saw the socialists and social democrats remain the largest constituency in the Assembly, extending their relative majority over the conservative and liberal Assembly Members.

Next formation formation shall take place in the summer of 4620.

Socialists and Social Democrats increased their share by 8 seats, to 46. Conservatives and Liberals saw their numbers increase by 1, to 38.

Aldegar, like Kanjor in 4612, left their seats vacant. These are shown in black. 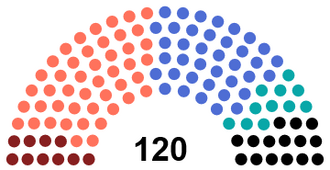 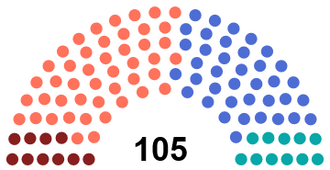 Retrieved from "https://particracy.fandom.com/wiki/4616_Seleyan_Union_Assembly?oldid=268805"
Community content is available under CC-BY-SA unless otherwise noted.