, Aldegār) is a sovereign country located in central Seleya. Spanning a large isthmus as well as the island of Somasi, the Aldegarian mainland separates North Seleya from South Seleya and is positioned in a historically important location for political and economic reasons. Aldegar is bordered by Tukarali to the north, the Schismatic Sea to the east, Mordusia and Saridan to the south and the Aldegarian Gulf to the west.

For many centuries Aldegar operated as a relatively isolated and conservative monarchy set apart from the rest of the world for linguistic, religious and broader cultural reasons. Despite this a series of republican revolutions (and monarchist counter-revolutions) led to wide changes in Aldegarian society.

The construction of the Aldegar Canal, which is a crucial link between the eastern and western hemispheres, contributed to the economic development of the country and has been a central part of successive governments' policy agendas. In spite of this Aldegar has failed to achieve a significant degree of political and economic stability in recent years, fluctuating between democracy and dictatorship.

Aldegar encompasses a wide range of natural formations and climates, from the desert-like southern coast to the snowcapped peaks of the northern mountain range to the plains of the Aldegar Gulf. The climate is mostly equatorial, with alpine and temperate conditions in its mountainous regions. Because of its location at the equator, Aldegar experiences little variation in daylight hours during the course of a yea

Main article: Structure of the Government of Aldegar

Aldegar is a presidential dictatorship with State President Davoud Hedayati as its leader. While considered to be a presidential dictatorship, the State has some democratic elements. The president is freely elected by universal suffrage but once elected hold dictatorial powers. The State President is considered to be the Commander-in-Chief of the Armed Forces of Aldegar which grants him or her ultimate authority over the Aldegarian Armed Forces; authority that previous Heads of States have not been afraid to use. The State President can also dissolve the Consultative Assembly and has the authority to veto any law that comes by the Assembly.

The National Consultative Assembly is the 625 member unicameral legislature of the State of Aldegar, it is lead by the Speaker of the National Consultative Assembly who is assisted by two direct deputies: First Deputy Speaker and the Second Deputy Speaker. Universal suffrage is extended to all citizens of Aldegar with the exceptions of convicted felons who are not permitted to vote in general elections but may be involved within party politics as per current Aldegarian election law. The Guardian Council is responsible for the oversight of all candidates in national and provincial elections, county and municipal elections have far more lax standards but are still under the purview of the Guardian Council. Mayors are not directly elected and are instead directly appointed by the State President. The Aldegarian Elections Commission is responsible for the operations related to elections.

Main article: Political parties in Aldegar
Aldegar, as of February 4645 is a one-party state dominated by the National People's Unity Party. Aldegar has had a long history of multi-party states; however it has also contributed to a high rate of turnover in governments and is responsible for the overall instability of the nation. The State President is responsible for determining which parties may or may not participate in elections. The State President may also use his or her presidential decrees to ban political parties.

In Aldegar the first level of sub-national divisions are the Provinces (Aldegarian: Walīyat) which are headed by Presidentially appointed (and Guardian Council approved) provincial Governors. Provincial Governors are responsible for the implementation of national law, maintain constitutional law and order as well as adherent firmly to the Yazdi faith.

Beneath the Provinces are counties and their governments are to be organized underneath provinces and their composition and organization will be handled by the Ministry of the Interior and Provincial governments. Counties have elected councils.

Domestic Intelligence is handled by the Service for State Protection while Foreign intelligence is the responsibility of the Aldegarian Foreign Service for Intelligence. There is also a internal security force to protect the state, government, president and serve at the will of the president which is the National Service for Civil Defense. The NSCD works closely together with the SSP.

Specialized components of the Government Gendarmerie and Municipal Police are as follows:

Aldegar has a relatively large economy, moderately high standard of living and a powerful currency, the Crown. There is heavy government interference in the economy largely through indicative planning, public ownership of strategic economic interests and protectionist trade policies.The economy is a mixture of state owned oil, Canal related trade, shipbuilding, shipping, defence industry and other large enterprises, tourism, village agriculture, and small-scale private trading and service ventures. Government spending is high at just over 40% of GDP for the central government. Debt is also high at 85% of GDP. Aldegar's economic infrastructure has been improving steadily over the past decades but continues to be affected by inflation and unemployment. Widespread corruption is another issue that plagues the Aldegarian economy.

Aldegar Airways (Aldegarian: transl. Havâpeymâye Aldegar) is the flag carrier of Aldegar. Aldegar Airways operates scheduled services in and out of its hubs and its central location in Pāytakht-e Aldegār International Airport. It operates as the largest airline company within Aldegar; it is also mostly owned by the Government of Aldegar, namely the Ministry of Transportation and Infrastructure.

Flag of the State of Aldegar 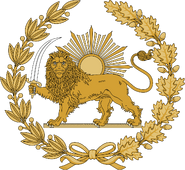 Coat of Arms of the Imperial State of Aldegar
Add a photo to this gallery
Retrieved from "https://particracy.fandom.com/wiki/Aldegar?oldid=305922"
Community content is available under CC-BY-SA unless otherwise noted.