Alkavon is a domain of the Imperial Commonwealth, one of the two domains of the Kingdom of Darnussia, and one of the five traditional Darnussian provinces. It is the largest of all the Darnussian provinces by both area and population. Its capital and largest city is Ghacrow, also the largest city in the Imperial Commonwealth. Alkavon is Darnussia's largest province by population, with major population centers at Ghacrow, Kraw, Grel, Lenz, Humel and the northern suburbs of Red Stad.

In antiquity, the forested region now called the States of Kozaria and Alkavon were settled by the Kozarians, with later in-migrations of Semites and Lusitânians. The Semetic migrants brought with them knowledge of agricultural principles, while the Kozarians taught the Semites knowledge of the ocean, on which they depended on as a food source.

There were between 30 and 400 Kozarian Tribes (depending on whose figures you use) in the area approximately covering modern Mainland Darnussia. These tribes alternately traded and warred with one another for centuries. Three of these tribes, however, had the greater historical impact than the others.

The Kozer Tribe, circa 1100 BCE, built the first true "Empire" on Mainland Darnussia, controlling well over two-thirds of the Darnussian Mainland, and traded with partners as far away as modern-day Pontesi and as far north as Rutania. While the Kozer dominion only survived for two rulers (Guntharix and his grandson, Ghentherix), their legacy was the spread of literacy and of their tribe's language, which became the lingua franca of trade and ultimately drove out other tribal languages on the mainland entirely. They also gave their name to the modern State of Kozaria (albeit indirectly), and the ancient religion that held sway, Kozarism.

The Alkron Tribe, circa 675 BCE, emerged from near Ghacrow, and engaged in brutal warfare in modern Alkavon, reaching as far as Red Stad in Kozaria at its peak, before a failed invasion of Nihaton crushed its thirst for further conquest circa 130 BCE. Alkavon's capitol is named for its most famous Chieftan, Gharen, who ruled circa 210 BCE.

The Gotheim Tribe, as far back as the Kozer era, were known more for their wealth than their actual military power. A largely plutocratic society by 675 BCE, they were one of the few tribes which had no standing army. They ruled from Dorporth (now Doressa), and assembled a coalition of forces to oppose the Alkrons to the north. After the defeat of the Alkrons in Nihaton, the Gotheims went on the offensive, first seizing the Alkron-allied fortified city of Essaie that had been the Gotheim's achilles heel for centuries.

Inter-Kozarian warfare largely ended circa 775 CE, when Darntus I, having unified the Greater Migrant Islands, turned his eyes to the fractious mainland. After a brutal defeat at Gracrow in 777, the remnants of the Alkron faction joined the Gotheims in a military alliance, under the High Shaman Kozar. The mainlanders, however, had far weaker technology, less manpower, and continued to suffer from a lack of unity, leading ultimately to the fall of Doressa in 780, ending the war.

King Darntus I divided the mainland roughly along the modern border, separating the Northern and Southern tribes. Alkavon and Doressa were chosen as the capitol cities of the two realms, as well as being the respective names, in the Narik language.

Despite the relatively brutal war of conquest, Darntus I proved to be a fairly benevolent ruler, and his chosen Dukes, likewise, were (by and large) better to the native people than their own native rulers had been. Thus it was, that when news of Darntus I's passing reached the mainland, it is said the Kozarians wept even more than the Nariks. Indeed, the mainlanders began calling themselves, and their language, Darnus, in honor of the man who became a beloved King.

In 1375, the successors to the Duchies of both Alkavon and Doressa were the same man, Lord Kozari, who was named for the ancient tribe. For 45 years, he ruled both Duchies simultaneously from the more central location of Red Stad. The United Duchy came to be known as Kozaria. However, the King enacted a royal edict, forbidding any man from ever again holding two large fiefs this way, which compelled Kozari to divide his lands on his death. His son, also named Kozari, chose to inherit the South, and the name Kozaria replaced Doressa, while the capitol remained in Red Stad. In the north, his grandson by his daughter, Jorren, inherited Alkavon, which returned to its ancient name, although the capital had moved to Ghacrow.

Alkavon was an impoverished region throughout history, with most of the population surviving mainly on whatever food they could nurse from the poor soil. Aside from Ghacrow, with its access to the plentiful Migrant Bay, the region suffered numerous famines and droughts whenever the river levels fell. What little export industry existed consisted mainly of mining tin, copper, and iron from the mountains and foothills dotting the province.

The Industrial Revolution changed Alkavon more than any other province of Darnussia, when coal, oil and natural gas deposits were found in the rocky hills making up the territory. This brought many jobs to Alkavon, although the people in general remained fairly poor and uneducated. Many Alkavanians had to resort, as their ancestors always had, to being professional soldiers and sailors, having little hope of making their fortunes at home.

As Darnussia transitioned from monarchy to democracy, Alkavon remained the poorest province, and the cheapest labor. Industrial cities dotted the region, to facilitate the extraction and use of mineral wealth. Whereever there was little mining or industry, the formerly forested areas became cattle ranches, a major Alkavonian industry to this day.

When the Lusitanians took power in the 2200s, it pitted Alkavon's native minority (who had seized power mainly through their predominance in the military at that time) against the Darnussian majority. Alkavon itself was least resistant to the Lusitanians; even the (mostly) pure Darnussians of Alkavon considered the Lusitanians their neighbors, and had long ties with Lusitanian families. The rest of the nation, however, was more resentful of Alkavon.

When the Deltarians invaded, their yoke fell most harshly on the Alkavon people, who were essentially seen as slave labor. Due to the recent rule by Lusitanians, the rest of Darnussia was not greatly sympathetic to Alkavon's plight, and spent far more time resisting Deltarians than helping Alkavonains. Many, if not most, of the victims of the 2323 nuclear strike on Red Stad, across the river in Kozaria, were poor Alkavonians, lured to the (temporary) capitol for jobs, or forced over as slave labor for the Deltarians.

After the restoration of Darnussian independence, Alkavon was a beneficiary of the shift in power from Merenbürg to Doressa, both because of Kozarian dependence on Alkavonian mineral resources, and because of Alkavon's position as the most populous region. Government aid flowed to the region in ever increasing amounts, in an effort to provide improved living conditions and a stronger economy.

When Narikaton declared its independence from Darnussia, Alkavon remained loyal to the government at Doressa, and provided the bulk of the mainland government's military personnel. It paid a heavy price for this, as Ghacrow was leveled by Narikatonian air strikes during the Second Darnussian Civil War.

Alkavon, like Kozaria, was not rebuilt with much in the way of support from the new National Government. It had to raise the money to rebuild Ghacrow and other destroyed cities from its own impoverished population; this led to resentment to both the State and the National governments, although it was a matter of popular pride when the capitol was returned to New Ghacrow.

When the Deimore Incident ended the Empire, and plunged Nihaton and Clenon into disaster, Alkavon (mindful of the "glory years" when Doressa was the capitol) largely blamed the elites of Merenbürg for allowing the nation to harm itself so severely a second time. Alkavonian delegates attempted to have the national capitol restored to the mainland, preferably at Red Stad, but this move was blocked by the Kozarians, who felt Merenbürg was still the logical capitol for the nation. While this did not make Alkavonians happy, it did lead to the rise of the Surprise Party, which was founded in New Ghacrow during this era, and came to lead the nation for many years afterwards. 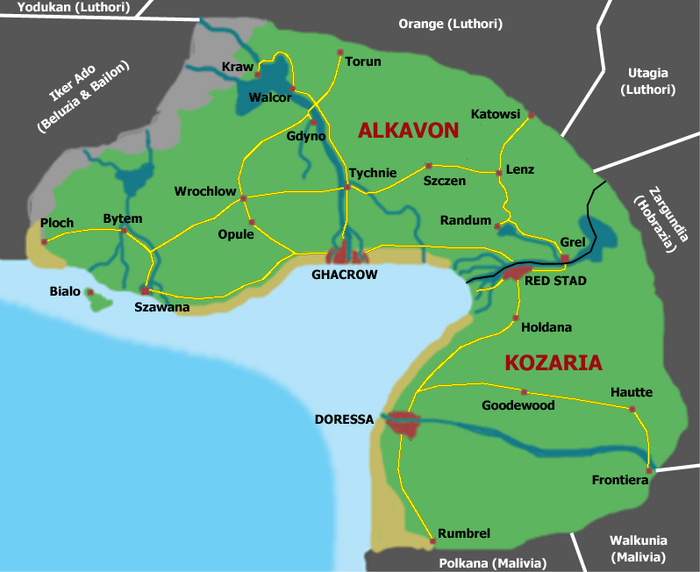 Alkavon is a hilly region, with relatively poor soil except near the lower river deltas of the Red and Crow rivers. The Crow River is sensitive to snow levels in the Alkavon Mountains which form the Darnussian-Beluzia border, which historically has led to drought and flood cycles, although improved engineering has largely evened out the cycle, with the Great Lake of Alkavon serving as a giant reservoir to keep the Crow river relatively level year to year.

Western Alkavon, with its sub-provincial capitol at Szawana (formerly known as "Alkavon") is a major petroleum producing region. Shepherding is the major agricultural use. The island of Bialo is home to the nation's largest sulfur deposits.

West-Central Alkavon, with its sub-provincial capitol at Wrochlow, is an arid region rich in aluminum. What little agricultural use exists is restricted mainly to foresting operations.

Central Alkavon, dominated by the Crow River, makes up the main agricultural region, as it is the only portion of Alkavon where the soil is sufficient for most farming. Ghacrow serves as the capital of Central Alkavon, but is legally also its own Sub-Province.

Northern Alkavon, with its sub-provincial capital at Walcor, contains the nation's tallest mountains, and its main source of metal ores, mainly iron, copper and tin.

Western Alkavon, with its sub-provincial capital at Randum, contains rich coal and uranium mining operations. Its hills are also home to most of the region's cattle ranches and pig farms

Retrieved from "https://particracy.fandom.com/wiki/Alkavon?oldid=293132"
Community content is available under CC-BY-SA unless otherwise noted.