The commander-in-chief of the wider armed forces is the Shewra but this power is exercised by the President of Aldegar by convention. The Aldegarian Republican Guard however is under the direct control of the President, the institution has its history in the Imperial Guard that was historically the personal armed force of the Shah of Aldegar.

Main articles: Order of battle of the Armed Forces of Aldegar and Rank, insignia and uniforms of Aldegar

All personnel were appointed in February, 4483.

The Military Intelligence Organization is a component of the General Staff however due to its nature acts autonomously for the most part.

In early February 4483 the Armed Forces of Aldegar held a 5 day military parade to show off domestically produced hardware that had been held in stock due to budget cuts and corruption within the armed forces. This ceremony was overseen by Minister of Defense and Commander of the General Staff General Taghi Arabnia.[1]

The Imperial Guard Corps also maintains the "Mobilization Resistance Forces" (Aldegarian: Niruyeh Moghavemat Basij) commonly known as the Basij which is a paramilitary volunteer force underneath direct command of the Shah and the Imperial family meant as a means to bring loyal citizens into the fold and indoctrinate them, though this is not public knowledge. While the Shah would like to think that the force is entirely loyal to him the Basij are also notably religious in nature of are often extremist in both their loyalty to the Yazdist faith and the Mobedan Mobed.

Perhaps the most secretive and elusive of the Imperial Guard Corps are the Immortals, titled after ancient Aldegarian warriors that struck a fierce sense of terror into their enemies, the Immortals are the elite special operations force of Aldegar. The Immortals, known as the Javidan Guard or the Javidan Force are responsible for the protection of the Shah, the Imperial family, all royal facilities and protection for top tier officials and visitors to Aldegar.

Main article: Order of battle of the Armed Forces of Aldegar 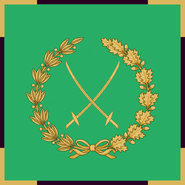 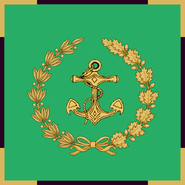 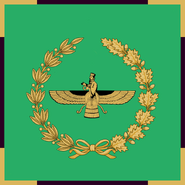 Flight Ensign of the Imperial Air and Air Defense Forces