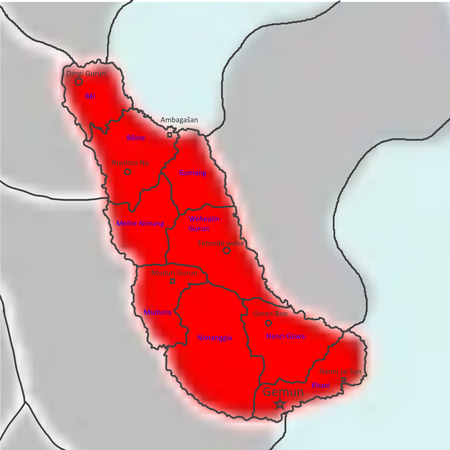 A country with a long colonial history, Bianjie was initially colonized by Sekowo in the 25th century, being transformed into the Federal Commonwealth State of Teoitan. In 2874, Teoitan was sold to Luthori, remaining under Luthori rule until it was ceded to Indrala as a result of the Luthori-Indralan War. It remained an Indralan colony until its decolonisation on October 5, 3775

Bianjie is an absolute monarchy with all public authority vested in the Khan. The Khan presides over a People's Committee of Ministers which functions as the country's cabinet.

The ruling Clan is the Fanggon Clan, who was elected as the new monarch, replacing the Dorgon Clan due to their poor governance. Bianjie practices an agnatic form of royal succession where the Khan nominates an heir from the next generation (usually sons or nephews) who's revealed upon the Khan's demise.

Khans from the Fanggon Clan[]

Bianjie has a small committee of 50 people from the People's Party of Bianjie, The Khan hold power over the People's committee and can overrule or approve their decisions to be the national law.

The country's judiciary is run by the Board of Punishments. The Board supervises all judicial officials and can make recommendations to the Khan on which rulings to uphold or strike down. It is composed of 15 members who are appointed by the Khan.

The Six Banners used to be the national army of Bianjie. Nowadays they have been replaced with a more modern approach, the Bianjien Armed Forces.

The Bianjien economy is poorly developed and almost entirely dominated by mining, agriculture and raw resource production. The government is trying to boost the tourism industry and make the economy greater using that.