Particracy Wiki
Register
Don't have an account?
Sign In
Advertisement
in: Places in Valruzia, Regions, Voivodeships of Valruzia,
and 4 more

listen) is on of the five Valruzian voivodeships, created in April 4245 with Administrative Reform. It occupies 630.600 km² and is the largest voivodeship by area in Valruzia. It is the least populated voivodeship with 3.9 million inhabitants and the population of just 6.3 poeple per square kilometer.

It is an essential industrial region in the country with the second-largest deposits of crude oil and natural gas. It is also an important cultural center with numerous castles and fortresses, which are one of the main tourist attractions.

The Voivodeship is located in the north-east part of Valruzia and borders:

It is the largest and most diverse in terms of geography voivodeship in Valruzia. The Kagan Mountain Range covers of the east-northern part of the region with the highest elevation point in the country Plarix Peak (Szczyt Plarys) at 4.230 meters above the sea level. The western part of the voivodeship is covered with highlands with the biggest being Central Valruzian Highland with about 97 thousand square kilometers. In the south, the region is mostly flat and covered by numerous plains and lowlands. The rivers Libard and Turycz have their sources in the northern part of the voivodeship.

Due to its geography and landform the density of transportation infrastructure in the Chynberg Voivodeship is at the last place in the country. Only a few important routes pass through the voivodeship. Chynberg is famous for its mountaneous cargo railroads which pass through the Kagan Mountain Range. The biggest airport in the region is located near its capital city of Hel - Hel International Airport.

Subdivision of the Voivodeship[] 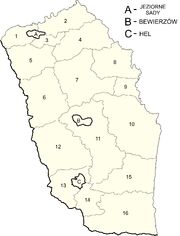