Fairfax, sometimes known as the Free City of Fairfax (Dundorfian: Freie Stadt Fairfax) is the largest city on Dorvan and the second largest city in Dorvik. It is located on the Regismund Channel which splits Dorvan in two. The city is named after Lord Alexander Fairfax, a Luthorian merchant who brought the city to prominence due to his excessive trade with the Kingdom of Dorvik during the early 16th century. For much of the cities early history it was known as Kanalstadt (Luthorian: Channel City) but Lord Fairfax's prominence and wealth saw the Dorvish Kingdom to rename it after the man who helped the Dorvish expand their overseas trade and trade with southern Artania.

A joint task force from the Ministry of Finance and the then-recently created Ministry of Economic Cooperation and Development formed Fairfax as an International Trade Zone (Dundorfian: Internationale Handelszone, IHZ) which permitted the local Fairfax Trade Council, a branch of the Fairfax local government, to set laws separate from the national Dorvish laws to encourage foreign trade.

Fairfax, originally known as Kanalstadt was a settlement of the Baitomanni in the ancient period of Artania, eventually the Baitomanni would come to be included in the Lorman and eventually Dorvish people overtime and conquest. The Baitomanni continued their raids on mainland Dorvik and Aloria until 576 AD when they were conquered by the Grand Duchy of Greater Kordusia. The city saw limited expansion and overall neglect by the Grand Duchy of Greater Kordusia due to the distance between the two and from that the Duchy of Vohrau, underneath the House of Faust-Essen worked its way into getting the city to eventually be theirs. Sometime during the 13th century the King of Dorvik awarded the city to the Duchy of Vohrau and the King's own family. It was here that the city began its long and storied history of trade and commerce.

In the early 15th century a man named Alexander Fairfax arrived from the Holy Luthori Empire and brought many Luthorian merchants to the city and established it as an outpost due to the request of the Dorvish King. Over a 30 year period the city grew to become a well known trading port for Luthorian and Dorvish merchants who traded all manners of goods. The death of Lord Fairfax in 1556 prompted the local government and the Dorvish King to rename the city to Fairfax. The Faust-Essen family greatly benefited from Fairfax's trade and grew their personal wealth astronomically.

In 3415 a joint task force of the Ministry of Finance and the then-recently created Ministry of Economic Cooperation and Development announced that they would be attempting to "reinvent the city which once housed one of the largest trading ports in Dorvish history" and upon recommendation the Office of the General-Plenipotentiary of Government Administration named the city as a "Free City" (a historical term for a city that governs itself semi-independently from the national government) and named it as an International Trade Zone. The city of Fairfax in turn created the Fairfax Trade Council which is responsible for crafting favorable economic policies to foreign companies who wish to headquarter and trade in Fairfax.

Fairfax has an International Trade Zone of the Dorvish State has a larger than average economy, accounting for some 5% of the overall Dorvish GDP. The Fairfax Trade Council is responsible for setting favorable trade policies to encourage foreign investment and trade. The Dorvish national government keeps a close eye on the the Fairfax Trade Council as it is the only portion of the Dorvish government able to be occupied by a foreigner but a majority of the council must be Dorvish citizens. Fairfax's local GDP is roughly 77b Dolgars, which accounts for roughly 5% of the Dorvish GDP.

Fairfax has an ever growing population, at several times through it histories the population has exploded and subsequently shrunk. The population is primarily foreigners who reside for business purposes, those native to Fairfax tend to be of a higher social class due to the proximity of trade opportunities. The Fairfax local government's census taken every 10 years places the vast majority of the population (roughly 51%) as foreigners with the remainder being Dorvish citizens. Fairfax is considered to be the largest multi-cultural center of the Dorvish nation.

Lying in between islands, Fairfax has a rich climate consisting of many foggy and rainy days during the fall, large snows during the winter, and mild summers. It is placed in a valley which has since filled up with water over the centuries. It is estimated that the original part of the city sunk over a two thousand years ago when parts of the valley flooded separating Miktar and Dorvan for good.

Fairfax is home to several universities and higher educational institutions, notably the King Regismund University of Fairfax, the Dorvish National Institute of Fine Arts and the Dorvan College of Theoretical Physics each of these is apart of the Royal University of Dorvan educational system which is handled by the Ministry of Education and Culture of the Dorvan Provincial Government. The Fairfax Department of Education handles all non-higher education located within the city itself. 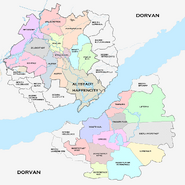 Boroughs of Fairfax
Add a photo to this gallery
Retrieved from "https://particracy.fandom.com/wiki/Fairfax?oldid=230682"
Community content is available under CC-BY-SA unless otherwise noted.