The First Dundorfian Civil War (Dundorfian: Erste Dundorfischer Bürgerkrieg) also known as the Great patriotic War (Dundorfian: Große Patriotische Krieg) by the royalist and conservatives. The civil war had it roots within the victory of the Socialist in the January, 1922 elections for the Reichstag. The civil war began on June 6th when members of the Home Corps and the militant members of the Republican Defense League (Dundorfian: Republikanerischer Schutzbund) opposed a protest by members of a conservative political movement. The Home Corps went to provide security for the protest and seeking a physical fight, as was common in the months before the civil war for both sides, began a brawl which would spark a movement across the entire Dundorfian Reich that would bring it to its knees and see it eventually collapse. The Dundorfian Police were brought in to break up the protest and the conservatives saw this as a means to arrest the socialist. Minister of the Interior Ludwig Otto von Hohenstauffen announced that the Dundorfian Police would be supported by the Reichsheer and would break the protest "promoted by the leftist to disturb public order".

The Kasier, Georg Wilhelm VI refused to take action against his own people. Historians suspect that the young Kaiser saw the writing on the wall during the outbreak of the civil war and did all he could to prevent the House of Hohenstauffen from falling victim to the civil war. It was during this period that the Kasier and his family began to move their wealth throughout the conservative-aligned areas of the Dundorfian Reich such as Dorvik and Rutania. Kaiser Georg Wilhelm VI left the management of the crisis to Chancellor Wilhelm von Asnacht, Minister of the Interior Ludwig Otto von Hohenstauffen (the Kaiser's brother) and Chief of Staff and Minister of War Regismund Augustus von Faust-Essen (the brother of the reigning Dorvish King). The three formed a triumvirate which would guide the Dundorfian Reich to collapse, historians often dispute that their actions had little to do with what Dundorfian historians call "...the course of history" while others speculate that the light handed response at first garnered the socialist legitimacy.

As the civil war spread throughout the Dundorfian Reich, the Imperial government was increasingly rendered useless. Services and local governments were either overthrown by socialist and organized into councils or were placed underneath direct control of the appointed Oberprasidents of the Ministry of the Interior. The Dundorfian Police began cracking down on the socialist far more than the conservatives, though there are several records of skirmishes between the Dundorfian Police and the Home Corps. Minister of the Interior Ludwig Otto von Hohenstauffen saw this chance to suppress members of the SRP and the IRP, he would go on to arrest several dozen members on the night of June 17th, 1922 including much of their senior leadership. Tiberius Bauer narrowly escaped capture when he fled to Kirlawa where the socialist were gaining ground due to an influx of international volunteers arriving from throughout the globe.

The Reichsheer remained immobilized due to Kasier Georg Wilhelm VI not wishing to see the state move against the people. Chief of Staff and Minister of War Regismund Augustus von Faust-Essen pushed the young Kasier to use the military or risk the total collapse of the Dundorfian Reich. By November, 1922 the Kaiser announced his abdication and proclaimed that the Dundorfian Reich would exist but no longer as a monarchy. This drove Regismund Augustus von Faust-Essen to mobilize the Reichsheer which had been a step short of revolting due to inaction, the last second influx of troops was not enough to counter the socialist as they swept throughout Kirlawa, Dundorf and the southern portion of Rutania. The conflict was more political than military, that was to come after the first civil war, the conflict saw many places within Kirlawa, Aloria and Dundorf proper organize along the lines of socialism, they formed councils and the ruling coalition of the SRP and IRP formed the first Dundorfian Democratic Republic.

The Dundorfian Democratic Republic, located primarily in Dundorf proper, Kirlawa and the south-east portion of Aloria would go on to strip all nobles of their titles, confiscate their wealth and land, deny them basic human rights and banned them from political offices. In 1923 the conservatives and royalist began to form militias and secret societies to oppose the socialist.

Origin of the conflictEdit

The first year of the warEdit

The second year of the WarEdit

In the 1920s, Civil War broke out in Dundorf between Socialists and Capitalists.

-revolt put down after two years 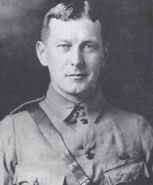 Republikanischer Schutzbund (Republican Defense League) volunteers giving the "fist" salute. These volunteers, part of the 1. Karlstein Metz Brigade are preparing for the brief two-week training period before heading to the front.

Flag of the conservative/monarchist faction of the conflict. The flag is a combination of the Kaiserliche Fahne (Imperial Flag) and the so-called Konservativer Stern (Conservative Star) of the Heimkorps.]] 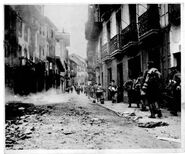 Add a photo to this gallery
Retrieved from "https://particracy.fandom.com/wiki/First_Dundorfian_Civil_War?oldid=230694"
Community content is available under CC-BY-SA unless otherwise noted.