Haldor officially the Stadt Haldor (Luthorian: City of Haldor) is the capital city of Dorvik. Haldor has a population of roughly 11 million people according a Ministry of the Interior census conducted in 4750. The entire city encompasses about 890km², it is the largest and most populous city in Dorvik. The Kas river runs partially through the center of the city and connects to the Kas lake which connects to the larger White Ocean. Haldor is one of the largest cultural centers in Dorvik and due to its international importance it is considered a "World City" (Dundorfian: Weltstadt).

Haldor was historically the capital of the Kingdom of Dorvik but was changed to the city of Fairfax sometime prior to the establishment of the Communist Party of Dorvik and the leadership of Regismund von Rohr-Mauss. Haldor was first documented sometime in the 9th century by Lorman historian Burchard Voß. It eventually went on to serve as a major center of commerce and manpower for the Kingdom of Dorvik before becoming one of the most prominent cities in Dorvik when it became the Free Republic of Dorvik at the turn of the 20th century.

Haldor is split down the middle by the Kas River (Dun: Kaas) which runs southward and pools in Lake Kas (Dun: Kaasensee) which is just outside of Wasse am Kas, a Haldorian borough. Kas River formed from the natural harbor known as "Augustushafen" which serves a large commercial and strategic port of the Dorvish economy and military. Haldor and its boroughs are home to many parks after areas underwent rapid urbanization over the decades of growth, Haldor and it's Department of Environment and Tourism have taken back large portions of building space that are otherwise abandoned or closed for whatever purposes and have either turned them into protected areas or parks and recreational places for families and residents of Dorvik.

Haldor is the largest municipality in Dorvik as the impact of the vast population has had an environment impact, which has led to increased Ministry of Environment and Tourism oversight over the cities public infrastructure and due to its close proximity to Augustushafen which sits towards the edge Haldor and splits the Kordusian province at the tip. State-level authorities have cooperated with local authorities to ensure that the environment remains as pollutant free as it possibly can.

Haldor is classified as a municipality (Dundorfian: Gemeinde) by the Ministry of the Interior, the regulator of administrative divisions in Dorvik and serves as the capital of the Dorvish nation. Internally Haldor is divided into 12 boroughs (Dundorfian: Stadtgemeinde) which operate similar to smaller independent cities with their own governments. The central Haldorian government however has broad authority over the smaller boroughs of Haldor. Haldor is largely considered to be an independent government from the rest of Greater Kordusia's provincial administration and the actual provincial capital of Greater Kordusia is Vilnau.

The Haldorian Senate is comprised of 5 representatives from each borough for a total of 60 members, each of these members is elected by a first past the post system. Officially the Haldorian Senate is chaired by the Lord Mayor but the Speaker of the Senate (Dundorfian: Sprecher des Senats) actually carries out the functions of the legislative head. The boroughs of Haldor are as follows:

Haldor is home to Petrov International Airport the largest airport in Dorvik, Artania and Terra. It is the central hub for several Dorvish and Artanian-based airlines including Dorvish Airways, the government owned and operated flag carrier. Other airlines such as Artanian Continental, Dorvish Air Service and Dorvish Airways Express (a budget subsidiary of Dorvish Airways).

Main articles: State Universities of Kordusia and Education in Dorvik

9500 schools line the outside of the city which serve an estimated 4,004,588 children and teenagers. The Haldor Education programe has been deemed one of the best in Artania, teaching children Math, History, Chemistry, Geography, Art, Instrument Playing, Dorvish, Foreign Languages, and various other subjects. Publicly-run kindergartens, elementary schools (years 1 through 6), and junior high schools (7 through 9) are operated by local wards or municipal offices. Public high schools in Haldor are run by the Haldor Metropolitan Government Board of Education and are called "Metropolitan High Schools". Haldor also has many private schools from kindergarten through high school.

Haldor was not the first capital of the Dorvish nation, it was first based out of Vinisk during the Kingdom of Dorvik and eventually moved to Fairfax during the Free Republic of Dorvik-era. Haldor has historically served as governmental and economic capital of the Dorvish nation, with Fairfax and Vinisk coming in a close second and third. Underneath the leadership of Regismund von Rohr-Mauss Haldor was transformed into modern city of the Dorvish nation and the Dorvish people. Regismund von Rohr-Mauss and his associates were instrumental in opening the Dorvish State Museum which quickly became the largest museum in Dorvik and remains both an important and influential cultural and artistic influence within the area.

Underneath the plan to create a modern museum structure in Haldor, the Dorvish State Archives (Dundorfian: Dorvisches Staatsarchiv) were attached to the Dorvish State Museum and serve as the official record keeping office of the Dorvish government and provide an important cultural service. Haldor alongside places such as Vinisk and others maintain large museum systems which are public-private ventures that encompas a wide variety of studies and content areas. Perhaps one of the most influential buildings is the Palatial Opera House (Dundorfian: Palastoper) which was opened by the first King of Dorvik, Regismund I. The Palastoper is located in the high-end borough of Eppen West which alongside Betzen serves as the home to many wealthy and influential people in Dorvik.

Outside of the historical nature of Haldor, the boroughs of Waiberndorf and Hafenstadt are well known for their nighlife scene and Dorvish nightclubs remain some of the most popular in the world. The development of electronic music, sometimes called "EDM" or electronic dance music has been attributed to Dorvish artist such as Patrik Myers, Nils Lips and others. Haldor also posses a large number of parks and outdoor areas which includes a large swathe of land belonging to the Eastern Palace that is owned by the House of Faust-Essen but portions are leased to the government in Haldor.

Haldor is home to the International Olympic Committee-grade Haldor Stadium (Dundorfian: Haldor Stadion) which is one of the largest football venues in Dorvik and home to many sporting events throughout the Dorvish nation.

Haldor is considered Northern Artania's largest economic powerhouse. According to studies, the total GDP of Haldor numbers some DDO 2.154 Trillion, which tops the list in Northern Artania. As of 3095, out of Terra's " Top 50 Companies " 21 are based in Haldor.

Due to falling land prices near the center of the city, many building companies have built tall skyscrapers which currently form the Haldor skyline. As a result, large amounts of population have moved near the center which greatly increased the cities number of citizens. From 3010 to about 3080 the population rose by a staggering 8 million. Excluding the Great Haldor Area, 9,584,541 people live in Haldor.

The most common ethnicities found in Haldor are Alorian (2.8%), Luthorian (2.1%), Davostani (1.5%) and Darnussian (1.4%), totaling about 8% of the total population of Haldor is populated by foreigners.

Haldor is a major international finance center, housing the headquarters of several of the world's largest investment banks and insurance companies, and serves as a hub for Dorvik's transportation, publishing, and broadcasting industries. During the centralized growth of Dorvik's economy following the economic recession of 2099, many large firms moved their headquarters from cities such as Vinisk (the historical commercial capital) to Haldor, in an attempt to take advantage of better access to the government. This trend has begun to slow due to ongoing population growth in Haldor and the high cost of living there.

Important and historical buildings in HaldorEdit 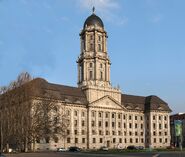 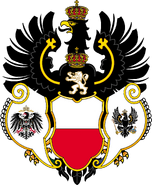 Coat of Arms of the City of Haldor 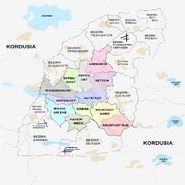 Haldor City Area
Add a photo to this gallery
Retrieved from "https://particracy.fandom.com/wiki/Haldor?oldid=284851"
Community content is available under CC-BY-SA unless otherwise noted.