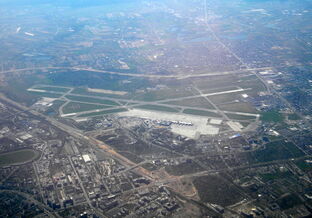 Hel International Airport (Valruzian: Międzynarodowy Port Lotniczy w Helu) is an international airport located 8 kilometers north-east to the city center of Hel, Valruzia. It is the second busiest airport in Valruzia by passenger and cargo traffic. The airport has an extensive connection with railway system and liesin the vicinity of major highways in the country making it the valuable cargo facility. The Hel International Airport has two runways which serve two terminals: one for cargo, one for passenger traffic.

Retrieved from "https://particracy.fandom.com/wiki/Hel_International_Airport?oldid=255712"
Community content is available under CC-BY-SA unless otherwise noted.