Hobrazia has largely been considered a "failed state" in comparison to the many successful Artanian nations. Stability was restored in 4677 with the foundation of the Hobrazian Democratic Federative Republic, though the government has largely been unchallenged. In January, 4678 the multi-party democracy was formally transferred into a single party state underneath the left-wing Unified Social Democratic Party.

Hobrazia is ranked, according to both Gath Defense Collective and the Zardic Institute of International Relations, as a weak economy power and small political/military power. The Hobrazian economy is largely dependent on the wealth of minerals based on the eastern side of the Black Mountain Chain, known locally as the Arszan Mountains. Timber and lumber products have been a secondary component of the Hobrazian economy with agriculture ranking third.

The Hobrozian empire of empires is unifed under one Emperor, currently chosen democratically by the people of Hobrazia, from the ranks of nobility. The cabinet memebers are appointed by the emperoro from the ranks of nobility, but the parliment, made up of commoners has the most power. In 4700 the Kanye Stans, memebrs of a new religion proposed a change to the country's anthem, with a melody based on Kanye West's ancient, thought to be non existent work - Yandhi.

Main article: Structure of the government of Hobrazia

Hobrazia, officially the Hobrazian Democratic Federative Republic is a one-party, semi-presidential federal state ruled by the Unified Social Democratic Party. The head of state of Hobrazia is the President of the Hobrazian Democratic Federative Republic. The President simultaneously holds the position of General-Secretary of the Central Committee of the Unified Social Democratic Party. Officially the term of the President is 7 years as per the constitution, unofficially if the President loses his role as General-Secretary, he could be replaced. The President (and General-Secretary as the two positions are integral) holds a majority of the executive power within Hobrazia and directs foreign policy, overall domestic policy and serves as the Commander-in-Chief of the Armed Forces of Hobrazia. The head of government of Hobrazia is the Chairman of the Council of Ministers sometimes called the "Prime Minister" or "Premier" erroneously by outside sources. The Chairman heads of the Council of Ministers and assists in the day-to-day operations of the Hobrazian government. As of recent time the Chairman of the Council of Ministers is the Deputy General-Secretary of the Central Committee. In practice the Unified Social Democratic Party, effectively organized as a communist movement, controls all state apparatus' and there is party parity with state authority.

Hobrazia has five primary sub-national administrative divisions, they are collectively known as "Regions" (Hobrazian: მხარე; tr. mkhare). These regions are lead by an appointed "Governor" who is appointed by the President. The regions, despite the "federal" nature of the nations official name, are largely dependent on the local authority of the Unified Social Democratic Party and the overall unitary authority of the state. Underneath the regions are "Districts" (Hobrazian: უბანი; tr. ubani) which are a collection of cities, towns and villages. A special administrative divisions was made for important cities or locations known as a "Self-governing municipality" (Hobrazian: ქალაქი; tr. k'alak'i) these are lead by Mayors and traditionally some form of mayoral council or administrative council. 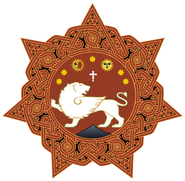 Hobrazia is home to a portion of the Black Mountain Chain known locally as the Arszan mountains. This has sometimes lead Hobrazia to be called "Transarszania" or "Transarszan" as seen by political groups such as the Hobrazian Nationalist Committee and the Transarszan Front paramilitary group. The Arszan mountains are very heavily mineral rich and provide a huge source of income for the Hobrazian government alongside its lumber industry. Zargundia, the closest region to the Arszan mountains is very plains like with much open flat land; it is home to many mining settlements. The coastal regions of Hobrazia (Deltaria, Kiduran and Stormereti) are far more hilly and covered in forest. Muzalkaz, the interior region is similar to Zardungia but features several smaller mountains and hills.

Hobrazia has a diversified economy with the largest sectors being tourism, agriculture and mining. About 52% of the Hobrazian workforce is employed in agriculture which makes up about 18% of Hobrazia's GDP. Most of these are engaged in substinence farming. Tourism is an important forex earner, with nearly 2 million foreigners visiting the country in 3702-3. Hobrazia has large deposits of commercially exploitable copper, zinc, gold, silver, coal and aluminium. Mineral production counted for 8% of GDP in 3701.

Hobrazia's economy is being restructured from one of a socialist model with high levels of state ownership to that of a corporatist model, with lesser public ownership but remaining with relatively high regulation. Hobrazia has a progressive income tax regime from 15% to 58%. Corporation tax is at 25% while VAT is 10% for basics and 20% for luxury goods.

Education in Hobrazia is divided into four states. The first is the nursery stage which children attend from ages 4 to 6. The second is the primary school stage from age 6 to 11 (Grades 1 to 6). Following that is the junior high school stage attended between the age of 12 and 15 (Grades 7 to 10) At 15 students have to select continuing with a specialised academic path or a professional one. This is the fourth stage and is done over three years (15-18). All schools (except some higher education ones) in Hobrazia are private but the Government runs a voucher system to fund each student's education.

Hobrazia has a private based universal healthcare system. The government manages the national health insurance programs and pays for all citizens' healthcare which is received from private hospitals and physicians. The amount of public coverage received by a citizen depends on their annual income with low income citizens receiving 100% coverage while the highest earners get just about 25%.

The population of Hobrazia is very homogenous with 89% of the population being Hobrazians. A large Malivian minority (7%) is found in the southern parts of the country. The rest are mostly Artanian immigrants of all ethnicities. The current population stands at 99.66 million citizens of the republic.

Hobrazians speak a unique language, called Hobrazian, which is a language isolate, meaning it is unrelated to any other language. Hobrazian uses its own alphabet, created during the Middle Ages. Although the letters of the Hobrazian alphabet largely follow the order of the Kalopian alphabet, the two alphabets seem to be unrelated.

Hobaism, a polytheistic nature religion, and the Hobrazian Orthodox Church, a Patriarchal branch of Hosianism, were once Hobrazian state religions, to which the majority of the population adheres. There are also small populations of Luthorans in the north such as the members of the Church of Muzalkaz and practitioners of Geraja in the south (comprised mostly of Malivian expatriates). Hobrazia is also home to a sizable atheistic/agnostic community. The Hobrazian Monarchist Party officially banned religion from Hobrazia. During the Empire of Empires era, Kanye Stanism, a new religion emerged. Kanye's coming has been foreseen in ancient Hobaistic texts, where he was praised as the lost god, representing the human impact on nature. His enviromental impact can be see in his teachings: "Ozone - Fuck it!". Kanye also viewed sex as ultimate form of artisitc expression and widely encouraged it, often calling it a "4th Dimension". In 4700 the Kanye Stans proposed Kanye to be a part of the national anthem.

The Hobrazian Republic is largely homogeneous in its ethnic makeup though liberal immigration laws have given rise to a few minority groups. Most of the population is formed of ethnic Hobrazians. The modern Hobrazian ethnic makeup was created by the merger of two tribes, the Hobratz and the Zargunians. The latter were the descendants of Deltarians, coming from modern Deltaria, and most Hobrazians therefore view Deltarians as their genetic cousins.

Hobrazia has many holidays and festivals throughout the year, thanks largely to the combination of Hobaist, Hobrazian Orthodox Hosian, and secular beliefs.

Holidays of the Hobrazian Orthodox ChurchEdit

Retrieved from "https://particracy.fandom.com/wiki/Hobrazia?oldid=295266"
Community content is available under CC-BY-SA unless otherwise noted.