Currently the Head of House and King of Drania is oficially Victoria I. She was crowned in St. Svorad Cathedral April 3253.

New religion in Drania was formed in 2840 during the revolution in Dranland. Head of the new church was named the King of Dranland hereditary by officials of Church.

During the revolution this religion was prohibited. However, people retain their faith and now this religion can be freely profess.

Official Head of The Universal Church of Terra is HRH Victoria, Queen of Drania. The officialy title of Head of Church is La Plejaltulo Registo.

The junta, although it eliminated the threat posed by Elbian separatists, was not able to curb the religious fanaticism of the Party of the Light, and eventually the military government collapsed in January 2844. The Universal Church of Terra became the state religion of the Respublica Dranii, and in 2852 Drania officially became the Theocratic Republic of Drania (Teocrática República de Drania), being ruled by the UCT clergy, the Metropolitans.

Since the Universal Church clergy was hereditary, soon a new aristocracy developed, with several Metropolitan families gaining most of the power. One of these families, the House of Santiago, became the most important family in Drania. As a recognition of this fact, an agreement was reached between the Santiagos and the Church, whereby Drania was to become a constitutional monarchy under the House of Santiago, with the monarch being the ceremonial head of the Universal Church of Terra, and the UCT continuing to have most of the political power. Consequently, Drania officially became the Theocratic Kingdom of Drania (Teocrático Reino de Drania) in 2873.

The relationship between the new monarchy, allied with the theocratic aristocracy, and the Church was not an easy one, as each tried to use the other as a tool for the political control of the country. The Theocracy was also affected by ethnic tensions between the Dranians and the minority Welsh and Kyo. This was exacerbated by the rise of the Eternal Harmony and Empire Magnificent in Sekowo in 2925, as the new Sekowan regime was officially Gao-Showa nationalist and Pan-Dovanist. The Kyo nationalists decided to support the Church against the monarchy, and for a moment, around the 2930s, it seemed that the inclusion of Drania in the Second Sekowan Empire was imminent. This was prevented by the Orinco junta in Sekowo and the Fourth Sekowan Civil War.

se of the Eternal Harmony and Empire Magnificent in Sekowo in 2925, as the new Sekowan regime was officially Gao-Showa nationalist and Pan-Dovanist. The Kyo nationalists decided to support the Church against the monarchy, and for a moment, around the 2930s, it seemed that the inclusion of Drania in the Second Sekowan Empire was imminent. This was prevented by the Orinco junta in Sekowo and the Fourth Sekowan Civil War.

It was only several decades afterwards that the Theocracy was again challenged by a Kyo nationalist movement, the Gao-Showa Imperial Revolutionary Front. By this time, however, the Dranian monarchy and religious aristocracy were entirely brought under the control of the Universal Church of Terra, so the development of a party advocating minority and religious rights was not well received by the Theocratic Kingdom.

Gongmangdo during the Revolution
In March 2964, a massive Kyo nationalist protest and Zen collective meditation gathering in Gongmangdo was forcefully dispersed by the Theocracy's religious police. This provoked much outcry from both the Kyo and Welsh nationalists, who began to rebel against the government. After the rebels successfully gained control over Gongmangdo in September 2964, the revolt turned into a country-wide revolution. For around three years the country was in chaos, as the revolution began to spread and attract more supporters from among all those dissatisfied with the corruption of the Theocratic regime. On December 12th, 2967, king Rodrigo I of Drania was forced to appoint the chairman of the Gao-Showa Imperial Revolutionary Front, Dong Young Sung, as the head of government. The next day the king abdicated and fled in exile in Hulstria. The revolutionary government established itself as the Holy Kingdom of Deulatoji, and almost immediately adopted several socialist measures, which were apparently very popular with the impoverished Kyo and Welsh.

This time the Kyo nationalists were able to apply their policy of uniting with the Second Sekowan Empire, as in August 2969 Drania officially became a colony of the Eternal Harmony and Empire Magnificent of Sekowo. This however coincided with the Great Sekowian War, so the colonial status existed more on paper. In November 2969, however, Deulatoji decided to take part in the war on the ultra-nationalist side. Dranian involvement was limited to a single naval battle, where the Dranian fleet that was attempting to land on the Sekowan mainland with military and medical supplies was entirely destroyed. With the destruction of the Eternal Harmony and Empire Magnificent of Sekowo in September 2980, Drania found herself forced to pay the full cost of the missiles fired against her ships.
This defeat, coupled with dissatisfaction caused by almost two decades of single-party rule and personality cult, and the rise of Welsh and Dranish political movements, determined the regime to accept a certain degree of political pluralism. In September 2985 the rule of Dong Young Sung ended, as the country became a Parliamentary Republic named the Enlightened People's Republic of Deulatoji.

After the revolution and reorganisation of Drania, the royal family Santiago lived few years in Hulstria in exil. But after the defeat of the dictatorship in the country, the royal family returned to his native land. The year 3005 was not only the last year of reign of King Rodrigo I, but also his last year of life. He died on 3rd May 3005. New head of state and head of royal family was crowned Carlos II.

In the years 3123 to 3183 the kingdom was abolished and a republic declared temporarily. King Eduardo I was deposed, but had not to leave the country. He fought for his right to inheritance. But unsuccessfully. Eduardo I died in 3165. His successor was Carlos, who was waiting for the throne till 3182.

Thanks to Imperial Crownlands of Greater Hulstria and International Monarchist League, in May 3182 was oficially crowned king of Dranland, HRH Carlos III of Drania in St. Svorad Cathedral with the presence of many monarchs and political figures and social life. New name of our country is Kingdom of Dranland.

After the death of King Carlos III, his oldest son Cristián was crowned as head of the Kingdom of Dranland in St. Svorad Cathedral in Iglesia Mayor, in 3210.

Cristián reigned unchallenged until 3228, when the fascists took over power in Dranland and aimed to smash the monarchy to establish a dictatorship. Cristián condemned the authoritarian tendencies of the new government and proved himself committed to democracy. He refused to meet with representants of the fascist government and did not acknowledge its legitimacy. However, when the NSP gained a supermajority in 3231, he was removed from his position and had to flee to Hulstria together with his daughter Victoria and the rest of the royal family.

In 3250, legislators agreed to re-establish the monarchy to overthrow the fascist regime. After Minister of Foreign Affairs Isabella Cuartero's corresponding resolution was approved by the Parliament, King Cristán re-assumed the throne until 3253, when he passed his position on to his daughter Victoria. Cristián I died in royal residence in Guederone on 7 August 3259. 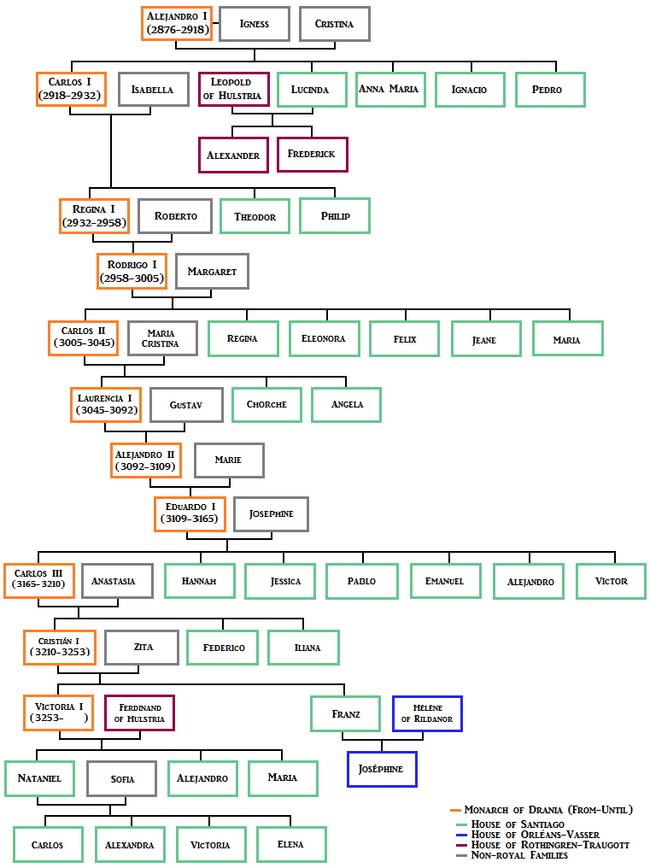 Current Monarch: Her Royal Highness Victoria I, Queen of Drania

List of successors to the throne under the royal succession law:

Crown Jewels of Kingdom of Dranland[]

Crown Jewels of Kingdom are stored in the chapel of St. Monica in the little village called Guederone, near the capital city Iglesia Mayor. The place has a historical tradition. In this chapel was crowned the first king of Dranland, HRH Alejandro I of Drania.

Last time it was used in 3253 during the coronation of HRH Victoria I, Queen of Drania.