Start a Wiki
The Hunting Residence of Terracche Lakes (Istalian: Palazzina di Caccia dei Laghi di Terracche) is one of three residences of the Istalian Monarch with Quattroregni Palace in Romula and Borromesi's Castle in the municipality of Rocca Bassa, Sarregna. The Residence is placed on the shores of the Firmamento Lake, in Trivendito and belongs formally to the municipality of Carmalla.
The residence is surrounded by large canrillaise gardens and then by what was in antiquity a vast hunting reserve which reached the shores of the northern basin of the Sovereign Lakes, on the east; today most of the hunting reserve is part of a natural reserve with a little portion still comprised within the perimeter of the residence.

Despite its name, the residence is a veritable Palace and its name derives from the first construction built on the site, the hunting residence of a powerful local Duke. The residence was then sized by the expanding Kingdom of Fidelia. King Beomondo IV, fascinated by the suggestive shores on Firmamento Lake and the lush forests on the area ordered the expansion of the residence so to be able to host the royal court during the hunting trips of the King.
The residence was furthermore expanded by the famous Deodato II which made build the baroque wing with the impressive Royal Gallery. This wing of the palace reflect perfectly the influence of the canrillaise baroque in Istalia at the time.

When Fidelia was defeated and destroyed by the Quanzar Empire, the Hunting Residence was used during the successive quanzar period as army barracks, army school and also just as a storage site of the army. This designated use caused serious damage to the lavish interior decorations, often openly vandalized, and gradually the structure began to deteriorate. It was finally abandoned at the dawn of the First Istalian Republic.

Under the Third Republic the Residence was restored under the long lasting dictatorship of Alessandra della Fiamma which made it her summer estate.
Some members of the following Quanzarian Royal Family too used the Palace as summer estate and such a destination was not changed when the Fourth Republic was founded, making the Palace one of the Official Residences of the President of the Istalian Republic. The Palace remained part of the State demain until today and it's still used as summer estate by the current Emperor of the Istalians and its family as one of the official Imperial Residences. 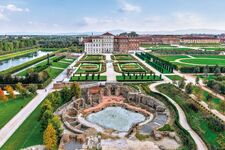 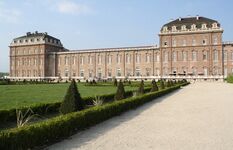 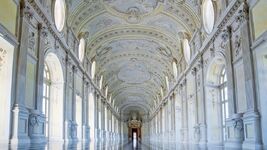 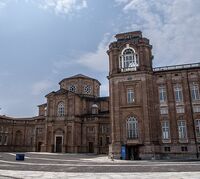 Royal Church and Tower of Belvedere
Add a photo to this gallery
Retrieved from "https://particracy.fandom.com/wiki/Hunting_Residence_of_Terracche_Lakes?oldid=268326"
Community content is available under CC-BY-SA unless otherwise noted.