Particracy Wiki
Register
Don't have an account?
Sign In
Advertisement
in: Places in Valruzia, Regions, Valruzian Voivodeships,
and 4 more

listen) is one of five voivodeships in the Republic of Valruzia, created in April 4245 on the grounds Administrative Reform. It occupies 222.900 square kilometers of north-west Valruzia and has approximately 5.1 million inhabitants. Its principal cities are Szary Kamień which is also the voivodeship capital, Baltuniwice, and Sztolniaty.

Thanks to its geography, Kampania Voivodeship has advanced and well-developed shipbuilding industry. The Bay of Czechot (Valruzian: Zatoka Czechocka) is the biggest natural port in Valruzia and is home to many shipyards. It is home to Valruzian Maritime University and is the center of science, research, and development of maritime infrastructure.

It is a popular destination of holidaymakers due to the high forestation which is highest in the country. Almost 60% of the voivodeship is covered with forests. It is home to Kampania National Park which is a designated biosphere reserve.

Recently small oil deposits were discovered in the eastern part of the voivodeship, which is on a limited scale exploited by Valruzian Petrochemical Concern (Valruzian: Walruzyjski Koncern Naftowy, WKN) and The Hamilton Company.

The Kampania Voivodeship is located in the north-western part of Valruzia and border:

The major feature of the Kampania Voivodeship is its long and diverse lagoons coastline. A distinctive number of small and medium-sized lagoons are present due to the offshore island, separating them from the open sea, forming unique landscapes. The largest town in Kampania Voivodeship is Szary Kamien which is located partially in the mainland of Valruzia and partially on one of the Czechot Island. 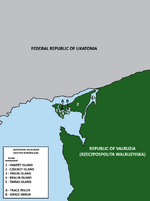 The Bay of Czechot in the north-east part of the Voivodeship is home to 85% of all Valruzia's islands, the biggest Valruzian island is the Czechot Island, home to half of the voivodeship's capital - Szary Kamien. Kampania's islands are one of the region's main tourist attractions and an important part of the Valruzian economy. Thanks to the diversified coastline, numerous natural ports, together with man-made ones, Kampania is the capital of Valruzia's maritime industry.

The Kampania Voivodeship is after Chynberg Voivodeship a region with the lowest density of road infrastructure. However, some important communication routes pass through the region like the Autostradas A1, A7, and A13. Port in the region's capital Szary Kamien is the largest port in the country by both passenger and cargo traffic. Approximately 420 vessels arrive at Szary Kamień daily.

Subdivision of the Voivodeship[] 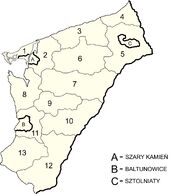 Kampania Voivodeship is divided into 15 counties, with 3 cities with county rights and 12 land counties. There are 697 municipalities within the voivodeship: 193 urban counties, 229 urban-rural municipalities, and 275 rural municipalities. There are two districts within the voivodeship. Five westernmost counties form the Czechot District (Rejencja Czechocka) named after the Czechot Bay. It is an important association of counties with economies based on shipbuilding. Two southernmost counties are part of the Capital District (Rejencja Stołeczna). The Sejmik of the Voivodeship considers issuing a motion to expand North-East District to easternmost counties of Kampania in order to associate oil-producing counties in Kampania with those from Chynberg.]