The Liberal Democrats is a federal political party operating in the Federal Union of Gaduridos. The Party was formed by Emily Hernandez in 3845, with the soul purpose to give the power back to the people. Our motto is "We Plan for the Many, not the Few". We have 114,569 members.

The Liberal Democrats invests in the rights of an individual to be free from government or corporate intrusion. The party believes that large entities should be acting "behind the scenes," but should be regulated to act in the best interests of the individual citizen.

Liberal Democrats believes in a government or corporations that operate in the background, but can provide useful services or benefits to the citizens should they be necessary. Under the party's ideal state, people would have a choice between government and corporation-controlled healthcare, education, pensions, etc.

Liberal Democrats is rather strict on labor laws, and would require workplaces to maintain a federally decided standard of safety and benefits. The party's ideal policies would require able-bodied, non-retired, and non-homeless people to be working except in certain circumstances to be eligible for certain benefits, a policy which would be enforced on both corporations and the government. 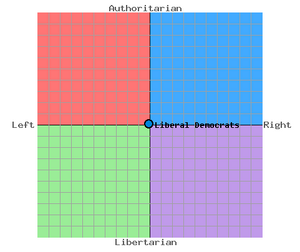 The Liberal Democrats is a centralist party, but positioned slightly more the left than the right but only minorly. They are also in the middle on terms of authoritarianism and libertarianism, incorporating views from both sides of the spectrum.

"The people demand change, and we shall deliver" - (Emily Hernandez-3846-election speech)

Liberal Democrats Headquarters are rather advanced compared with he rest of Gaduridos.

Retrieved from "https://particracy.fandom.com/wiki/Liberal_Democrats?oldid=170411"
Community content is available under CC-BY-SA unless otherwise noted.