Likatonia, officially the Republic of Likatonia, is a nation located in north-western Seleya. It is bordered to the east by the Lodamun and to the south by the Valruzia. Likatonia is made up of five States: Pirland, Madison, East Bolton, West Bolton and Norwalk. The official language is the Luthorian.

A full history of Likatonia from its creation to the present.

Main article: Order of Battle for the Likatonian Armed Forces

The LAF's High Command is composed of members of the Joint Chiefs of Staff, a body composed of the service chiefs from each service who advise the President on military matters. However the President is the only one able to execute a military order.

President of the Nation (Commander-in-chief)

General of the Likatonian Army (LA)

The LAF is composed of 5 branches that is each represented by a Chief of Staff in the Joint Chiefs of Staff who advises the President on military matters.

Main Branches of the LAF:

The LA is to be responsible for the ground security, and territorial integrity of the state.The LA is composed of 300,000 active personnel and 500,000 (Army Reserve) personnel.

The LN is to be responsible for the maritime security of the state and to protect the state at sea.

The marine corps is to be responsible for providing power projection, using the mobility of the Likatonian Navy to rapidly-deliver combined-arms task forces on land, at sea and in the air.

The coast guard is to be responsible for coastal security and minor naval security.

Likatonia is the Federal Democratic Republic. Governmental powers in Likatonia are divided into legislative, executive and judiciary branches. The legal system of Likatonia is civil law, strongly influenced, as is the institutional framework.

The President of the Republic is the head of state and directly elected to office.

The government is headed by the Chancellor, who has 12 ministers in charge of particular departments of activity. The executive branch is responsible for creating a budget, executing the laws, and guiding the foreign and internal policies of the republic. Under the federal republic this role was held by the Prime Minister.

Likatonia has a three-tiered judicial system, made up of the Supreme Court, County Courts, and Municipal Courts. The Constitutional Court rules on matters regarding the Constitution. In addition, there are misdemeanor courts, commercial courts, and administrative courts.

Likatonia's legislative branch is made up of single chamber Congress. This was House of Representatives witn the number of members may vary as Constitutional Amendments are passed, but it typically ranges from 200 to 750. However, in 4718 this was replaced by the Senate which has 100 members, 20 from each state. This was eventually replaced with the People's Chamber in the Communist Republic. In the 4880 constitition, the Senate was restored but this time with 99 seats. The legislature proposes and passes laws. 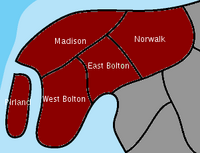 Likatonia is one of the fastest growing economies in Likatonia. The largest sectors in the contry is financial services, which is prominent in Clovisport, Mining in East Bolton and Logging in all the sates. Other sectors are also sizeable, such as in transport, automotives, fishing and farming; the last two which are normally run by very small companies. Also many services are provide by the government of likatonia such as most rail and bus services and most power plants are owned and operated by the governmet. Liktonia's economy is linked with many other countries in Seleya with some even owning parts of comapnies. The largest and most powerful company in Likatonia is the Hamilton Company.They are closely linked with the success of the country and the former party called the CRP. Likatonia also has a stock exchange which is updated on the forum.This recent growth have assured the people that Likatonia is an important country in Seleya and can one day become a world power.

Current sporting has turned to Hockey. The Likatonian Hockey League (LHL) has recently started and adopted 15 new teams, including the Clovis Eagles, the Bolton Quails, the St. Jackson Bombers and the Chester Tigers.