Start a Wiki
The Luthori Parliamentary Election, 4608 was an early election held in the Republic of Luthori, with all 600 seats in the Imperial Diet up for election.

The SDP and the NRIR had merged a few months before the election to form the National Democratic Alliance.

The previous government, the Second Triumvirate had passed a bill increasing retirement age from 63 to 65 years old. The bill was extremely unpopular and encountered a lot of resistance. 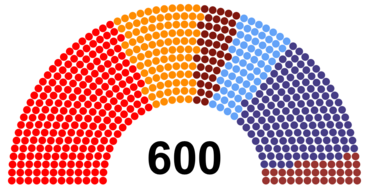 All the member parties of the previous government are losing seats. The CPL makes a very high score, while the NDA becomes the third party, still making a lower score than expected. A cabinet comprising the CPL and the NDA takes place known as the Franklin I Government.

Retrieved from "https://particracy.fandom.com/wiki/Luthori_Parliamentary_Election_4608?oldid=277241"
Community content is available under CC-BY-SA unless otherwise noted.