Michela I of Istalia (Michela Sofia Adriana Maria Teresa, Romula, 14 August 4631 - Romula, 26 February 4724) was the reigning Empress of the Istalians and Monarch of the Istalian Empire since 11 February 4695 until her death.

Princess Michela was born in Romula under the reign of her grandfather Nicola, who became very fond of his niece and to whom he transmitted his passion for the music, especially the classical one.

After completing compulsory education, Princess Michela followed basic military training but did not continue in her career or in more advanced studies, preferring to increase training in politics and international diplomacy, specializing in international trade and diplomatic cooperation studies at a foreign university in Zardugal. At the end of her studies, the Princess dedicated herself to the diplomatic carrers, entering the Ministry of Foreign Affairs starting to cooperate with the international analysis bureau but devoting herself mainly to the promotion of Istalia abroad, a mission enhanced by her position.
The Princess, after seven years in that position, however, asked to work abroad and was then sent as a special representative in some foreign embassies, first in Kalopia and then in Lourenne and Kazulia, where she had the opportunity to participate and promote negotiations on important treaties which Istalia would later stipulate in the following years.

When her father ascended the throne in 4663, Princess Michela became the Heir to the Throne and had to return permanently to Istalia to respect her duties as Princess of the Crown.
Princess Michela, however, managed to combine her new role with its past commitments, probably becoming the most important flag of the Made in Istalia, praising and promoting abroad, as well as at home, the quality and goodness of Istalian products and continuing to promote worlwide the establishing of new relations with Romula.

Princess Michela had to live with the pressure by the media on her private life since adolescence and this probably prompted the Princess to devote herself to a career and activities that allowed her to travel often across national borders. In this regard, the Princess has always declared that her period of study in Zardugal was one of the most serene of her life, where, among other things, she had the chance to meet her future husband.

Captain Ghazi Ben Hassan Al Madyan, an Air Force officer from a prestigious Istalian majatran family from north of Trivendito, was at the time assigned to the staff of the Princess, stationed at the local Istalian Embassy, ​​both as an emergency pilot (the Imperial Family had leased a corporate jet to be used in an emergency and always ready at an airport in the capital Zardic) and as Princess' escort to events and receptions, noted by Imperial Household among the Armed Forces' officers for its origins from a noted and distinguished family. Although it had not been foreseen, the Imperial Family immediately supported the interest that arose between the two young lovers who decided to marry when the Princess returned from Zardugal.

Although the conjugal life proved to be happy for the couple, the difficulty in conceiving an heir was always a cause of great affliction for the Princess, so much that between the end of the '70 and the middle of '71 she temporarily separated from her husband to cure herself from a hint of depression. However, she took also the opportunity to visit several clinics abroad, and when she returned to Istalia to participate to the 100 year celebration of the Istalian Empire, she decided with her husband to follow some of those highly-experimental therapies.

Finally, although after only a few years, at the beginning of 4665 the long-awaited pregnancy arrived and on December 16th the birth of Prince Tommaso Hassan (the second name given in honor of Prince Ghazi's father) was announced with joy.
Following their experience, the couple founded a whole new foundation to support and further cullect funds for the research on fertility matters.

However, on 22 June 4675 the life of Princess Michela and little Tommaso Hassan were upset by a tragic news: the death of Prince Ghazi in a car accident in the center of Romula. The Princess recovered from mourning only after a year of retreat at Villa Annamaria, where she found rest also from the media and journalists, but, according to the most intimate friends and relatives, princess's sadness signed her face and expression since then.

During the following years, Princess Michela tried to overcome the death of her beloved husband by dedicating herself entirely to diplomatic and representation activities on behalf of Istalia. This often kept her away from the country but when Thomas Hassan was no longer obliged to follow her mother on her travels, it was increasingly difficult for the Princess to stay close to her son. Tommaso Hassan proved to be quite rebellious during his early youth and on several occasions he ended up on the front pages of gossip magazines generating scandals for the Imperial House, so much so that on more than one occasion Princess Michela had to intervene publicly. Fortunately, after his twenties, Prince Thomas Hassan finally began to act as future heir to the throne, dedicating himself to political-constitutional studies and military service into the Air Force.

Since the beginning of the '90s, with her father advancing with age, Princess Michela drastically reduced her commitments abroad so as to be able to assist Alexander II with state affairs, flanking him until in 4695 when he died and succeeding him to the throne.

Since the ascension to the Throne of her father Alessandro, on his desire, Princess Michela was created Princess of the Crown with the title of Her Imperial Highness the Imperial Grand Princess of the Crown Michela of Istalia, Dukess of Marsama. The Ducal title came from his husband, who was created Duke of Marsama by Emperor Nicola I the day before his marriage with Princess Michela in 4657.

Since her birth she was entitled to the style of Imperial Highness under Imperial Decree issued by Emperor Michele I in 4574, which reconizes the title and style to the children of the Imperial Grand Princes.

When she succeeded to her father in 4663, she ascended to the Throne abviously with the treatment of Most Excellent Imperial Majesty as Michela I, by the Will of the Nation and the Constitution of the Empire, Empress of the Istalians, Protectress and Guarantor of the Constitution, Defender of the Democratic Values, Supreme Commander of the Imperial Armed Forces of Istalia.

As Monarch of Istalia and head of the Imperial House, Michela I was the Grand Master of all the Istalian dynastic and chivalry orders.

Young Michela at the time of her studies in Zardugal 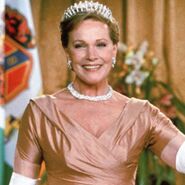 Michela I the day of her coronation
Add a photo to this gallery
Retrieved from "https://particracy.fandom.com/wiki/Michela_I_of_Istalia?oldid=293421"
Community content is available under CC-BY-SA unless otherwise noted.