The Narikatonite Empire [1], (Narik: Imperia Narikaton; informally described as the Third Empire of Narikaton) was an island nation located off the south-west coast of Artania. It split from and invaded the Second Darnussian Democratic Republic in 3125, before annexing the rest of the territory by 3139. In 3178, an uprising resulted in the seceding of the Darnussian Republic from the Empire, and the subsequent stand-off between the two nations became known as The Tensions. In 3321, Narikatonite Empire joined with the newly formed Kingdom of Darnussia to form Imperial Commonwealth of Narikaton and Darnussia.

Narikaton was the result of the Unification War of Darnussia, and evolved into the Kingdom of Darnussia. Modern Darnussia has suffered two civil wars and been occupied by two foreign powers in the previous millennium. War between the Jewish population and the Hobaists was the main cause of violence in the 24th Century. Tension between the Islander peoples and the Mainlanders was the main cause of the 2585-2599 war. As an eventual result of the war, Darnussia became the Empire of Narikaton and Darnussia and after the Deimore Incident, Darnussia became a disorganised, anarchistic nation-state. Between 2760 - 3033, it was a conservative, federal republic, but an uprising in 3033, turned the nation into the Second Republic. When civil war broke out in 3122, Narikaton once again split from Darnussia, before setting out on a global conquest for colonial lands, including what was once the old mainland of Darnussia, which soon got bogged down in the very violent Darnus-Narik War, as Narikaton tried to control its new colony.

Political instability has been commonplace in Narikaton throughout its history. Various ethnic minority groups have held power for long periods, especially during the second half of the twenty-third century, while civil war, genocides and political "cleansing's" have raped Darnussia and Narikaton of peace throughout it's modern history. The most arguably stable period was the Darnussian Democratic Republic, until even that modern, liberal democracy was consumed by the flames of war. Since then, various political parties have attempted to stitch the wounded nation back together, but war runs in the blood through the veins of the Darnussian people, and disunity, petty squabbles and sectarian hatred keeps this once great nation from stepping back onto its feet.

For history before 3125, see: History of Darnussia

Imperia Narikaton declared independence on 10 December 3125, in the midst of the 3125 Darnussian Uprising. 70% of the Darnussian armed forces mutinied to join the new government

The Duchy of Narikaton is the largest and wealthiest duchy in the Empire, but it also have the largest unemployment rate, resulting in massive economic inequalities. It is the core of the Empire, and home of the capital city, Merenbürg, also the capital of the duchy. It is Narikaton that is the birthplace of Darnussia, and it rich in culture and history. It is also the most right-wing and religious of the three.

Clenon is the 2nd largest Province in the Darnussia and it's capital is Podrueja. Historically, Clenon was the Darnussian region with the highest percentage of practitioners of Judiasm. Clenon was hit the hardest by the Deimore Incident, but a generational program of soil treatment has restored life to the portions of Clenon once too irradiated to reside in.

Nihaton is the duchy of the three, and its capital is Moete. It is probably the most liberal of the three, and a stronghold of the Democratic Party; however at the same time has the lowest average income. Religiously, it is the most secular of the three duchy's, but the majority are still Lutheran. Most of the Deltarian Minority lived in Nihaton, before being purged in the 32nd century. 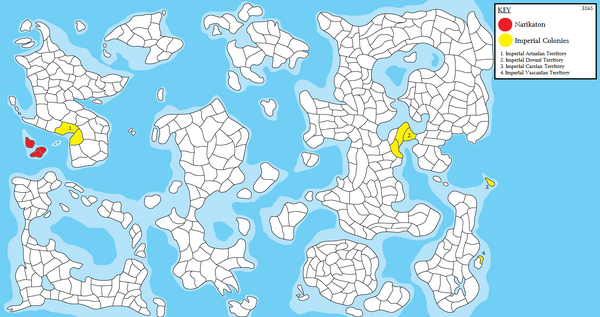 Those in bold are still held by the Narikatonite Empire

Following the fall of the monarchy in Rutania in 3158, their sole colonial possession in central Dovani was divided and split between the three largest imperial Axis powers: Luthori, Greater Hulstria and Narikaton at the 3158 Fort William agreement. Narikaton gained the largest share, as well as 900,000 colonial subjects. It is the only colony which Narikaton has gained any use from, its primary export being timber.

The island of Carsia off the eastern Dovani coast had a very low population of around 7,000. It was an autonomous region of Zardugal since 3101, and before that of Luthori. The island was purchased by Narikaton in 3155 for a small fee, due to its complete lack of natural resources, farmable land, or indeed any useful purpose at all, and continues as a colony in Narikaton's grand empire.

The IAT is a small strip of coastline consisting of an extremely low population. It was leased to Narikaton from Luthori in 3165 for use by Narikaton's military. It was used primarily for naval manoeuvres and weapon testing, and has seen at least 10 nuclear tests. It was returned to Luthori in 3185.

Narikatons main other claim is the area of the Artanian Mainland currently under the administration of the Darnussian Provisional Government. The highly bloody Narik Wars were fought over this very reason, until Narikaton's humiliating defeat in 3193, upon which Narikaton gave up its administration of the area de jure. However, despite the Imperial Parliament stating otherwise, by order of the Imperial Chancellor, Narikaton still claims the region as the Imperial Artanian Territory, and is recognised by several international powers.

Narikaton is, in theory, a constitutional monarchy, with power being held by the Imperial Parliament. However, in practice, the politics of modern day Narikaton is murky, with the limited parliament not entirely given the powers over which it is claimed to have via the constitution.

In reality, the Emperor holds far more power than he is allowed within the law, and the Imperial Chancellor, who theoretically is elected by the Parliament, is in fact appointed by the Emperor. These two men practically run the Empire as a dictatorship, often completely overruling the democratically-elected Parliament on many issues, particularly the state of the war.

The Imperial Parliament has 301 seats, all of which are elected by proportional representation by those the imeprial authority recognizes as citizens based on wealth, religion, and race. The Parliament was founded in 3139, as the First Narik War drew to a close. However, the IMN and NRA held all seats due to corrupt and unfair elections, until the first free elections 3160.

There have been only 4 legal political parties, and they are allowed to sit in the Parliament. In 3165, this number was reduced to 3 with the controversial merging of the INM and the NRA. Currently, the INM hold 35% of the seats, and are in coalition with the INP. The liberal Democratic Party holds a respectful 40% of seats.

The cabinet is lead by the Imperial Narikaton Movement (INM) in coalition with the Imperial Nationalist Party. In reality, all their decisions must be ratified by the Emperor and Imperial Chancellor.

Narikaton's main industry is finance. However, due to the war, Narikaton has been surviving literally constantly, on aid from other countries, mainly Greater Hulstria and the Holy Luthori Empire. Some exports in weaponry have ocurred however. In 3193, the Narik economy almost completely collapsed, which was one of the main reasons for Narik defeat.

His Majesty's Imperial Armed Forces of the Empire

The Imperia Narikaton armed forces are officially called the His Majesty's Imperial Armed Forces of the Empire. They consist of the Imperial Army, Imperial Navy and Imperia Air Force and the Imperial Colonial Corps. The first three services are conscript branches, while the fourth, is run by volunteers, mainly natives of the colonies themselves. The forces overall consist of around 2,200,000 men.

In their heyday of 3145-3175, they were considered one of the strongest armies in the world due to their dedication, training and weaponry. However, this reputation lay in tatters after their humiliating defeat in the Second Narik War. Only men aged 18 and over may serve in the Imperial Armed Forces. No women are allowed.

Narikaton is a very conservative society at its core. A consequence of this is that, when change does occur, it is often sudden and violent. It is deeply religious, and has a strong sense of individualism. The people have a deep pride of being Narikatonite, of both their country and their race. As a result, racism is an accepted part of Narikatonite society, with the government themselves actively promoting the Narik race as superior to the rest.

Fiscal libertarianism, as well as a strong authoritarian government on social issues are accepted parts of life here. A deep loathing of socialism and unionism is present, as the government continues their deeply racist Nariki supremacist programme. Militarism and religious fanaticism is an accepted part of life in Narikaton

Terran Catholicism and Hobaism are generally persecuted in Narikaton due to their Deltarian and Hobrazian roots. This has been the case for centuries throughout Darnussia.

Like in any country, sports are very popular in Narikaton. Football (soccer) is the national sport and it is most popular. The Imperial Football League is highly followed. Some of the most popular sports include Football (Gridiron), Hockey, and Basketball. Unlike mainland Darnussia, football continues to be played every season, and the Narikatonite National Team have gotten to the finals of the UAFA Football Championships on more than one occasion.

The recent racist laws by the Imperial government have forced everyone to register their ethnicity. Only those of Narik ethnicity are allowed to join the armed forces or stand for election.

Retrieved from "https://particracy.fandom.com/wiki/Narikatonite_Empire?oldid=293203"
Community content is available under CC-BY-SA unless otherwise noted.