Start a Wiki
The National Forces of Defense of Valruzia (val.: Narodowe Siły Obrony Walruzji, NSO-W), officially known as National Forces of Defense of the Republic of Valruzia (val.: Narodowe Siły Obrony Rzeczypospolitej Walruzyjskiej, NSO-RW), commonly known as National Defense (val.: Narodowa Obrona, NO) are the national, uniformed armed forces of the Republic of Valruzia. The term National Forces of Defense has been chosen for the official name for the armed forces in order to highlight the primary goal of the forces which is to defend the nation from any hostilities. It consists almost entirely from professional soldiers as there is no general conscription in Valruzia, and citizens may be requires to serve in the military only in wartime. In the 44th century it became one of the best equipped and one of the best-funded land forces on the Seleyan Continent with the average annual spending more than 5.5% of the total GDP.

As in many countries, the supreme strategic goal of the National Forces of Defense of Valruzia it to ensure favorable and secure conditions for the realization of Valruzia's national interests by eliminating external/foreign and internal/domestic hostilities and threats. The most common goals of the NSO-W are:

All five branches are supported by 75,000 civilian and other uniformed personnel responsible for maintenance and logistics. Those include:

During wartime, the President assigns, at his own discretion, the Supreme Commander of the National Forces of Defense who is directly subordinate to the President.

National Reserve Units (val.: Narodowe Oddziały Rezerwy) is an integral part of the National Forces of Defense, however, they are not a separate branch of the NSO-W. Men and Women who express their will to be assigned to the NOR are given basic military training which lasts 6 months and is paid for by the State, trainees receive the full salary of professional soldiers. After training, they are automatically transferred to NOR and treated as decommissioned soldiers with the possibility of military service renewal. Currently, NOR consists of 210,000 members, however, the Minister of Defense can issue regulations to increase or decrease the total number of reservists. 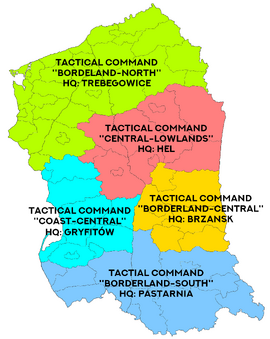 Despite the unitary character of Valruzian statehood, the National Forces of Defense have a relatively federal character. Despite the central General Command of the National Forces of Defense located in Nowogard, there are five tactical commands (military districts) which are not the reflection of the administrative division of Valruzia and cover counties from different Voivodeships. Those are:

Retrieved from "https://particracy.fandom.com/wiki/National_Forces_of_Defense_of_Valruzia?oldid=304197"
Community content is available under CC-BY-SA unless otherwise noted.