The National Gendarmerie (Can.: Gendarmerie Nationale) is the major national police force of Kanjor. Its primary duties are the protection of life and property, preservation of the peace, and prevention and detection of criminal offenses. In previous Kanjorian models of policing, officers exercised their powers to police with the implicit consent of the public. "Policing by consent" was the phrase used to describe this. It expressed that the legitimacy of policing in the eyes of the public was based upon a general consensus of support that follows from transparency about their powers, their integrity in exercising those powers and their accountability for doing so. Underneath the orders of the Ministry of the Interior, the National Gendarmerie was returned to their hybrid civil-military police role in accordance with Minister of Defense Benoît Delaunay in February, 4684.

The Director-General of the National Gendarmerie are traditionally members of the Armed Forces of Kanjor's ground forces, usually assigned the rank of "General". The current Director-General is General Léo Marchant who was appointed by Governor-General Félix d'Aurilimar in Februrary, 4684 and confirmed by the National Assembly.

The National Gendarmerie was formed from the Police Force Unification Act of 2341, from the five regional police forces, which ranged from proper police forces, through to local vigilante militias under the control of local governments. Following the Bayonville troubles, the Unification Act was announced to prevent another Bayonville from occurring. The Gendarmie de Silliers performed well in Bayonville, but fears were that lesser-able police forces in Martois and Oléri-des-Grâces would not be able to deal with such an uprising.

In accordance with the plan provided to the National Assembly and the Ministry of the Interior, the Director-General General Léo Marchant stated his intention to hire 150,000 new members of the Gendarmere over the next 10 years bringing the total to nearly 200,000 to replacing the previous cadre of the National Gendarmerie. Director-General General Léo Marchant announced a cooperation program with the Lourennian Gendarmerie to train and coordinate police efforts.

There are several different uniforms of the Gendarmerie Nationale.

The normal uniform of the Gendarmerie Nationale consists of a pale-blue shirt, and dark-blue trousers with a black stripe.

The uniform of the Gendarmerie de l'Intervention ordinarily comprises a black beret with a black, military-style suit.

Each province has retained the uniforms of the old Provincial Gendarmerie in the form of a ceremonial uniform. They are only used on important occasions such as the visit of a dignitary, or a parade. 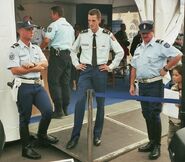 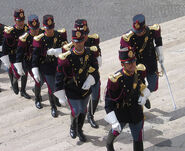 Add a photo to this gallery
Retrieved from "https://particracy.fandom.com/wiki/National_Gendarmerie_(Kanjor)?oldid=276041"
Community content is available under CC-BY-SA unless otherwise noted.