Nicola I of Istalia (Nicola Michele Giulio; Romula, 30 October 4571 - Romula, 2 January 4663) was Emperor of the Istalians and thus Monarch of the Istalian Empire since 15 November 4621 until his death. He ascended to the throne being the eldest son of Alessandro I and Empress Consort Valentina and he was the first heir apparent to the Imperial Throne as well as the first child born within the Imperial House under the Empire, founded just two months before his birth. He is also famous because in 4596 he contracted a prestigious and dynastic marriage with Josephine of Hulstria, a year before he was officially created Imperial Grand Prince of the Crown by his father.

Nicola was born in Romula just two months after the declaration of the foundation of the Istalian Empire on September 1st 4571 and he was the first member of the Appiano De Borromei family after its elevation to Imperial House of Istalia. Actually, only a decree by the newly enthroned Michele I created Nicola officially Imperial Prince, like his father, and thus member of the Imperial Family, being born out of wedlock when his parents just lived together.
At the time his father had just completed the Military Sciences' Studies and was about to join the Defence Staff unaware of the fact that Michele I,his oncle as younger brother of Alessandro's father, was already looking at him as his successor.

Nicola, despite the new role of his family, was raised like any other child and indeed for the first years he continue to live with his parents in their Romula's appartment and attending publix schools. Only since 4576, when his father began to be ever more involved by Michele I in the state affairs, it began to be clear that Nicola was the son of the next Emperor.

At the end of 4578 Nicola's parents finally got married and after a few months Alessandro was officially created Grand Prince of the Crown and thus officially designated as heir apparent to the throne. Nicola, 8 at the time, remained however Imperial Prince on decision of his father in respect of the three daughters of Michele I who had the title of Grand Princesses.

When Nicola graduated on High School, between 4589 and 4592 he attended the Political Sciences course at the State University of Romula alongside extensive military studies and training in all three services of the Armed Forces but privileging the Navy. Despite initially he was a little reluctant about following the military career, it was on his father's insistance if he joined the Armed Forces developing then a passion about the Navy which became his services of reference. within the navy he was specifically trained on submarine's crewman: he was part of a 8 months cruiser of the Nuclear Attack Submarine NSMN 519 Siracosa.
In 4594 he started to attend the Strategic Military Studies to the Agirgento Navy's High Accademy.

Grand Prince of the Crown[]

On 9th Jenuary 4597 Nicola was officially created Imperial Grand Prince of the Crown by his father the Emperor Alessandro. Since this moment he was fully able to act as Imperial Regent when provided by the Law. As official heir, Alessandro was forced to left the Navy to focus on his duties of heir to the throne, starting to share with his father the duties of the Imperial dignity.

Succession to the Throne[]

Since 4618 the old age and some health issues forced Emperor Alessandro to create several time Nicola as Imperial Regent to take charge of the Imperial duties on behalf of his father.
Alessandro I actually died on 15 November 4621 in the Hunting Residence of Terracche Lakes during such a period of total rest prescribed by the doctors while Nicola was acting as Regent. Nicola instantly succeeded to his father as Nicola I while the coronation took place on 21 February 4622.

Prince Nicola since he was teenager has been heavily under the attention of the gutter press which reported several Nicola's liaisons with commoners as well as more famous girlfriends, like the one with Cristina Montevecchi, aka Kris K, two years older then him.

In 4592 Nicola met Josephine of Hulstria, youngest daughters of the former reigning Kaiser and Kaiserine Hans Friedrick Albert lll and Annemarie I and sister of the reigning Kaiserine Sophie I. She was spending a summer in Istalia to study the local language and culture hosted by the family of Alessandro I, since years a close friend of the Hulstrian Imperial couple.

In 4593 Nicola and Josephine were spotted on holiday together on a beach of Selucia in intimate moments while since 4595 the couple was seen together in several mundane and social events and also in one official events of the Imperial Family, the baptism of Princess Michela, daughter of Alessandro's cuisin Grand Princess Ginevra, youngest daughters of Michele I.

In 4598 finally Nicola and Josephine's wending was officially announced by Quattroregni Palace after the one made by Josephine in Hulstria some months after the tragic death of her parents on a plane crash, as a way to honor them who strongly supported the daughter's union with the Istalian Prince.

In 4605, after many attempts and also a miscarriage, the couple finally gave born to their first child, a male, who was baptized Alessandro Giovanni Mattia Michele. Nicola if was present at the moment of the birth, he was not present for the baptism because sent in mission with the expedictionary force of the navy against the Kazulian fascist regime and in support of the rebel forces. Due to his status, however, he didn't partecipate to the Battle of the Kazulian Waters serving on a frigate dedicated to the escort of the merchant ships carrying aid and supply to the kazulian rebels but then joining the operation to recover the wounded and the bodies of the fallen sailors.

In 4609 Nicola and Josephine had a second son, Grand Prince Adriano, while in 4612 the family was completed by a daughter, Grand Princess of the Crown Sofia, called like the beloved sister of her mother, Kaiserine Sophie I of Hulstria.

Since 4571 Nicola after a decree of Michele I held the title of Imperial Prince and the treatment of His Imperial Highness like is natural father.

Only when his father Alessandro succeeded to Michele I as Emperor of the Istalians Nicola and his sister Eleonora were elevated to the title of Grand Princes of Istalia.

Nicola was officially created Imperial Grand Prince of the Crown on 9th January 4597, maintaining the treatment of Imperial Highness.

When he succeeded to his father in 4621, he ascended to the Throne as His Most Excellent Imperial Majesty, Nicola I, by the Will of the Nation and the Constitution of the Empire, Emperor of the Istalians, Protector and Guarantor of the Constitution, Defender of the Democratic Values, Supreme Commander of the Imperial Armed Forces of Istalia, clearly with the threatment of Most Excellent Imperial Majesty.

Nicola, once he ascended to the Throne, authomatically became the Grand Master of all the Istalian dynastic and chivalry orders. 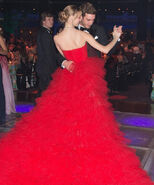 Nicola and Josephine dancing at a gala 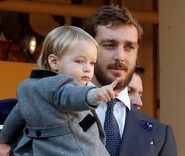 Nicola I during a gala
Community content is available under CC-BY-SA unless otherwise noted.
Advertisement