Nihaton is a domain of the Imperial Commonwealth, one of the three domains of the Narikatonite Empire, and one of the five traditional Darnussian provinces. Compared to the southern province of Clenon, Nihaton is more urbanized but less populous.

The Island of Shirmania was first populated by the migratory proto-Jewish settlers on their way through Migrant's Pass. They were followed by a wave of proto-Kozari (and possibly other) peoples from the mainland. Unlike neighboring Narikaton, the aboriginal Jewish culture had taken stronger root, and the new migrants from the mainland adapted to the existing civilization, rather than overwhelming it.

Early Shirmanians, like their Nariki neighbors, were prolific sailors and traders, forming trade ties with each other and neighboring peoples. Ultimately, this led to an in-migration of Narikis, and the Narik language with it, as the two islands became culturally more interdependent.

While city-states had formed in Shirmania in antiquity, there were relatively few wars, as land and resources were considered plentiful by the people - so much so that immigration from other lands was welcomed as a source of cheap labor. This lack of warfare between neighboring cities, combined with the island's wealth, ultimately made the region a target for aggression from outside, including early Bailonese pirates, Svrin navies, and enterprising Narikis.

Several of the stronger city-states formed what could be termed the first government for the entire island, the Shirmania Defensive League, circa 550, in an attempt to stem the damages from the foreign raids and sackings. Still, the alliance was quite weak, and coastal cities made a habit of hiding wealth far inland on a regular basis, unable to adequately defend themselves by force of arms alone. Ultimately, most of the city-states had to pledge fealty, and tribute, to strong Nariki states, in an effort to protect themselves from others.

In the mid 700s, war broke out on Narikaton, as several of the strongest city states launched all-out war on one-another. Ultimately, King Darntus I emerged victorious, and unified Narikaton for the first time. By doing so, he had also effectively unified Shirmania, as nearly all of the cities had pledged tribute to one or another of the Nariki belligerents. Only one battle during this war emerged on Narikaton, but it was a fateful one, between the House of Raux and the House of Windwick, as Raux attempted but failed to seize Windwick's protectorate of Podrueja, in modern Clenon. After Raux' failure, it was forced to capitulate to the House of Af Ehjnhelm, as allies of Darntus. Had Raux won, it may well have been able to resist Af Ehjnhelm, and (ultimately and ironically) unite with the Windwicks to block Darntus' rise.

With Narikaton and Shirmania secured under his reign, Darntus I turned his eyes to the mainland, and the Kozarians. He was victorious there as well, thus unifying what would become Darnussia for the first time.

Nihaton as part of the Duchy of Shirmania[edit | edit source]

Initially, Darntus I divided his realm into four parts, with modern Clenon and Nihaton combined as the Duchy of Shirmania. The Duke of Shirmania, in a further irony, came from the House of Raux; Wynmer de Raux, the losing commander in the battle of Podrueja, became the Duke of Shirmania after the war; mainly because he had proven a loyal and competent commander in Kozaria.

With centralized rule, military technology flowed in from Narikaton, while exotic materials came from the mainland. Shirmania's resourceful land and resourceful population grew in numbers and in power rapidly.

By the 1300s, Darnussia was in jeopardy of civil warfare, as the mainland provinces had united by blood, and Shirmania was threatening to become more powerful than Narikaton, which had always dominated the nation. The solution from Narikaton was to subdivide the realms, to ensure Narikaton was the greatest of the five, rather than merely a co-equal third. While Kozaria and Alkavon were re-divided largely along their historic border, Shirmania had to be divided despite having no historical or traditional boundary to use.

Ultimately, the decision was made in Merenbürg to split the people from the resources; the grand cities of the north, with their trade ports and guilds would become Nihaton. The southern and central portions of the island, which included the rich mines and fertile soils of the southern shield, would become Clenon, named for the King's second son, Cletus, who also became the new realm's Duke.

The side effect of this decision was to entrench a reality on the ground; that the northern portion of Shirmania was far more Catholic, and the southern portion, while majority Catholic as well, still had a strong Jewish minority. Clenon was also the primary immigration point for Jews from Beiteynu, who brought with them the more modern incarnation of Judiasm, rather than the Narikaton variant which still had a strong admixture of Kozarian Pagan influence.

As Darnussia transitioned from monarchy to democracy, Nihaton's importance only grew as a center of learning. The University of Moete, the nation's oldest institution of higher learning, trained the elites of the nation under both monarchy and democracy; even Merenbürg's University was a poor second to an education in Moete.

Rampant urbanization occurred first in Nihaton, as the region's lack of significant geographic boundaries to constrain its cities caused Moete and Jasper to grow quickly in all directions. With industrialization came even more jobs, luring people off the river valley farms and into the factories. However, seismic activity along the Shirmania fault prevented the cities from developing large skylines like other, later Darnussian major cities - instead, Moete and Jasper became sprawling, relatively low density cities stretching to the horizon.

The rise of Lusitania, followed by the Deltarian invasion, marked a turbulent century for Darnussia. Nihaton was relatively spared, except for its small Jewish population, although the university was forced to shut down, and was converted into a military base. Not wanting to become the center of fighting, some Nihatian leaders allegedly informed on rebel movements, rather than see a crackdown as had occurred elsewhere. The relatively mild impact of Deltarian rule on Nihaton may have helped the nation ultimately recover, but it made Nihaton resented for years afterwards. To this day, the Darnus word for "coward" is based on the root word "Nihat."

With Darnussian independence restored, Nihaton resumed its role as the premiere source of education. Because of the relatively mild treatment, Nihaton was also the nation's richest State at the outset of the Second Republic, and briefly took Clenon's traditional role as the finance center of the nation.

Nihaton, however, had far less to rebuild than the other provinces as well, so while the other four States built new factories and infrastructure, Nihaton stagnated, largely maintaining the status quo it had for centuries. Within 200 years, Nihaton was a distant third to the other Narik speaking States. Nihatian resentment at relative poverty, however, paled to its sense of superiority over the Darnus-speaking States on the mainland.

When the mainland government change the national motto to a phrase in the Darnus language, rather than the traditional Narik spoken on the islands and by the elites, a nationalistic fervor swept the islands. This led ultimately to Narikaton's succession from the Republic, and civil warfare between the Narik speakers of Narikaton and Shirmania, and the Darnus speaking mainlanders. Anton, the generally recognized claimant to the former Darnussian throne, was proclaimed Emperor of the Imperia Narikaton. Clenon and Nihaton both voted in special session to join the Emperor against the mainland, after it became clear that most of the military backed the new Emperor.

Shirmania was largely spared during the war, with the mainland government concentrating on decapitation strikes on Narikaton's major cities. Ultimately, Doressa was bombed (conventionally) and the war ended with a nominal Narikaton victory, although the new Emperess Antoinette accepted some democratic oversight over his new government, largely on private pressure from Shirmanians who feared the economic consequences of despotism.

Despite these fears, ultimately Claude Deimore became the dictator of Darnussia, taking over the weakened democratic institutions and forcing the Empress to capitulate. His reign of terror lasted approximately a decade. Deimore became increasingly paranoid that the Clenese, particularly the Jewish Clenese, were behind the failures of his rule, and ultimately ordered what became known as the Deimore Incident - the systematic nuclear bombing of parts of Shirmania, including southern Nihaton where Clenese influence was "suspected."

After the Deimore Incident, much of Clenon was a nuclear wasteland, with survivors overflowing Red Cross camps and clamoring for evacuation, while Alkavon and Narikaton squabbled over where the new capital city would be. Despite a generous amount of Kozarian aid, many Clenese died, and many more were permanently disabled. Most of those who survived made their way to overwhelmed Nihatian refugee camps.

The new government of the Third Republic ultimately began rebuilding efforts on an unprecedented scale, with the goal of making Shirmania safe to live on within a century. The stated goal was to remove the top twelve inches of soil from the entire "hot-zone."

Much of the former Trans-Shirmania Highway was converted to a high capacity maglev rail system, which carried tons of irradiated soil and rubble daily to be disposed of at the new ports, which carried the radioactive material out to be slowly dispersed into the sea, or were carried up to the dormant volcano of Mount Shirmania, to be injected into the magma of Terra itself. Both strategies were intended to dilute the radioactive residues down to the level of the natural background radiation of Terra, and were developed from knowledge obtained from the earlier nuclear attacks on Red Stad in Kozaria.

Today, most of Shirmania is safe, with radiation levels only slightly higher than the average location on Terra. Many of the cities have been rebuilt, and much of the population has returned, although most of the history was lost. Fortunately for Nihaton, Moete and Jasper were mostly spared, giving these two cities the distinction of having the nation's oldest buildings.

Nihaton occupies the northern one-third of Shirmania. Originally its boundaries were marked by a forest line to the east and west, which has long since been harvested, and a mountain path which is no longer in use linking the forests. Geographically, a division along the Moete and Dinsk Rivers would have made more sense, but the division of the island was solely done for political reasons at the time, circa 1300 CE.

Nihaton's most predominant geographical features are the Moete and Jasper Rivers, which dominate the heartland of the State. Much of the region contains mid-sized towns, or suburbs of the two leading cities. The climate of Nihaton is very wet, leading to its reputation as the "greenest" State, despite the rampant urbanization of its main corridors.

The city of Eris, originally a Nariki naval base, was the only major victim of the Deimore Incident in Nihaton. Although it has been rebuilt, it has never quite recovered the charm it once held. 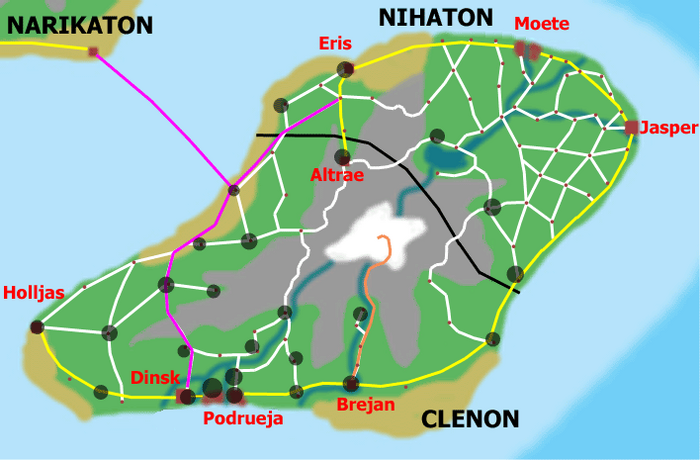 The map shows the major cities and transportation systems of Shirmania.

The yellow line marks the Trans-Shirmania Highway, from Altrae in Clenon, via Moete in Nihaton, and back to Podrueja in Clenon before its terminus in Holljas. The roadway has been rebuilt with a maglev rail system running through its median.

The orange line marks the now-disused Brejan Spur from the maglev line, used to bring radioactive materials for destruction at Mount Shirmania.

The violet line indicates the proposed Shirmania Peace Tunnel, to link the maglev/highway system of Shirmania to Narikaton. If successful, an even more ambitious project to link Moete to Alkavon is proposed.

The black circles indicates sites hit during the Deimore Incident.

Nihaton, like Clenon, is linked by the Trans-Shirmania Highway and Maglev Rail system. The roadway is marked simply as "Route 1" throughout both States, without reference to State identity. Lesser Nihaton highways are prefixed with the letter "S" for Shirmania, due to the use of "N" by Narikaton.

Retrieved from "https://particracy.fandom.com/wiki/Nihaton?oldid=293185"
Community content is available under CC-BY-SA unless otherwise noted.