Particracy Wiki
Register
Don't have an account?
Sign In
Advertisement
in: Valruzia, Politics of Valruzia, Executive Branch in Valruzia,
and 2 more

President of the Republic of Valruzia

The President of the Republic of Valruzia (Valruzian: Prezydent Rzeczypospolitej Walruzyjskiej) is the head of state and government of Valruzia. President's rights and obligations are determined by the Constitution of Valruzia and other statutory laws. President is the de facto highest office within the republic and the highest ranking representative. He or she heads the executive branch. In addition to that, the President has hir or her own legislative initiative and may propose his or her legislative projects and national budget proposals. In some extreme cases, he or she has the right to propose parliament dissolution. President of Valruzia represents the republic on the international scene. After the 4805 Constitutional Referendum the office of the President has been established the head of government, and Valruzia turned into a presidential republic.

The President of Valruzia is elected by Valruzian People every six years. His or her term is fixed with the term of the Sejm of the Republic of Valruzia. He is elected in a direct, general, equal election by a secret ballot. According to paragraph 3 of Article 1 of Subsection I, the President is elected by an absolute majority. It means that a presidential candidate has to get more than 50% of votes to become the President, and if no candidate gets more than half of the votes, a second round of the presidential election is called with the participation of the two candidates with the largest and second-largest number of votes respectively. According to paragraph 4a and Article 7 of the constitutional amendment, a candidate must be at least 35 years old, no later than on the day of the elections.

The President of Valruzia according to the constitution is the guarantor of the continuity of the Republic. President is the most important representative of Valruzia within the country as well as on the international scene. He/She signs treaties with foreign countries in the name of Valruzia. The President, after the recommendation of the Sejm, establish diplomatic relations with other countries. He/She also has the right to appoint ambassadors. The President receives letters of credence from the ambassadors nominated by other countries. Under some circumstances, the President has the right to issue a pardon for individual offenders. President also has the authority to grant Valruzian citizenship. At his or her discretion, the president awards orders and decorations. As said before, the President has his/her own legislative initiative, and my propose a wide range of bills: statutory law, constitutional amendments, budget proposals.

The President is also the Supreme Commander of the Armed Forces of Valruzia. He/She appoints the Chief of the General Staff and the commanders of all of the service branches; in wartime, he/she nominates the Commander-in-Chief of the Armed Forces and can order a general mobilization. The President performs his/her duties with the help of the following offices: the Chancellery of the President, the National Security Bureau, and the Body of Advisors to the President. 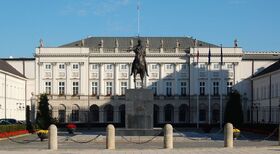 A specially dedicated department of the Internal Security & Counterintelligence Bureau is responsible for the organization of transport of the Valruzian Head of State. For everyday transport, the President uses specially modified Bonning B7 equipped with bulletproof windows and run-flat tires as well as an armored body. Thanks to its weight, which exceeds 4 tonnes, it is equipped with a specially designed 6-litre diesel engine, generating 550 BHP.

For domestic and international flights, the President uses specially designed Reglair i4x, known under the name Słoń 1 (lut.: Elephant 1). It is state-of-the-art aircraft, specially designed for transportation of the Valruzian Head of State. It is equipped with the newest technologies which allow the President to perform his/her duties during flight.

It is not precisely determined by the constitution, but according to the customary law, in case of President not being able to perform his/her duties, it is the Marshal of the Sejm who will act as the Preisdent of Valruzia. He then calls early election.