Start a Wiki
The Romula International Stock Exchange (Istalian: Borsa Internazionale di Romula), in brief RISE, is the main and most important stock exchange in Istalia, located in the capital city Romula, mainly focused on the international financial markets and operating markets in equities, bonds, derivatives, FX, money markets and precious medals and commodities. Currently the RISE is also the largest and most important stock exchange in Majatra and it's considered the financial heart of the continent.


When in Romula began the construction of the Terra Global Financial Center, the Istalian economy had firmly established itself as one fo the most developed of Majatra, reaching Vanuku, and as the main financial market.
This was one of the reasons that pushed Romula to promoting the construction of a new financial district thought to become the financial heart of Majatra.
Impeled and assisted by the Government, the main stock exchanges companies in Istalia, decided to unite and create a single istalian holding company to handle all istalian financial market, the Gruppo Borsa Istaliana S.p.A. which owns all the Istalian stock exchanges, among them also the Milona National Stock Exchange, the main stock exchange dedicated to the national financial market, and the Compensation and Guarantee Fund (Istalian: Fondo di Compensazione e Garanzia). 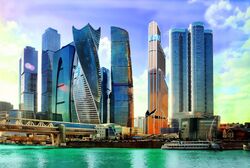 The RISE is located, as mentioned, in the Terra Global Ginancial Center of Romula, in the so called New Financial District, which modern and futuristic skyline has become one of the symbols of the Istalian rampant economy since 42nd century.

Retrieved from "https://particracy.fandom.com/wiki/Romula_International_Stock_Exchange?oldid=231843"
Community content is available under CC-BY-SA unless otherwise noted.