Particracy Wiki
Register
Don't have an account?
Sign In
Advertisement
in: Places in Valruzia, Regions, Voivodeships of Valruzia,
and 4 more

Edit
watch 01:36
We're Getting Mutants in the MCU - The Loop
Do you like this video?
Play Sound

listen) is one of five voivodeships in the Republic of Valruzia, created in April 4245 on the grounds Administrative Reform. It occupies 473.400 square kilometers of north-west Valruzia and has approximately 10.8 million inhabitants and a population density of 22.8 people per square kilometer. Its capital is located in Brzansk which is one of the biggest cities in Valruzia and one of the financial centers of the nation.

It is the most industrialized region in Valruzia and one of the nation's wealthiest. Thanks to large deposits of crude oil, natural gas, and coal some of the largest refineries and coal power plants are located in the voivodship. WKN Volantis remains the largest employer in the region.

The Ruzian Voivodeship is located in the south-eastern part of Valruzia and borders:

The largest river flowing through the Ruzian Voivodeship is the Marska River, in the basin of which the voivodeship is located. The river is navigable and is the second most important transportation route after the Libard river.

As the Valusian Voivodeship, Ruzian Voivodeship is also one of two voivodeships with densest transportation infrastructure and is an important transportation hub. Most of the important transcontinental highways pass through the region and most of the nation's cargo railroad is located within the voivodeship. The second-largest airport in the country - Brzansk - Olimpia Airport - is located in the region's capital Brzansk. It is the most technologically advanced airport in Valruzia.

Subdivisions of the Voivodeship[] 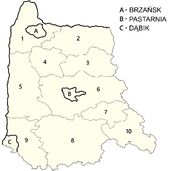 Ruzian Voivodeship is divided into 13 counties (3 cities with county rights, 10 land counties) and has 1102 municipalities: 199 urban municipalities, 394 urban-rural municipalities, 509 rural municipalities. Counties within the voivodeship from three districts: Dabik District (Rejencja Dąbik) in the south, Pastarnia District (Rejencja Pastarnia) in the east, and Central Valruzia District in the north. [[Brzańsk|Brzansk]] is an important transport hub for the whole country. Numerous companies have either its headquarters or divisions within the voivodeship. The most important are: Walmaglew, LOT Valruzian Airlines, Homeconnect. WKN Volantis is one of the biggest employer in the Voivodeship and the most important part of the Ruzian economy.