Particracy Wiki
Register
Don't have an account?
Sign In
Advertisement
in: Atlas of Terra, Geographical Information, Geography of Istalia 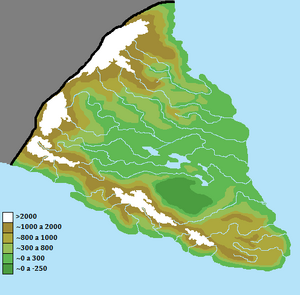 The Sarrentina Peninsula or Istalian Peninsula (Istalian: Penisola Sarrentina, Penisola Istaliana) is the easternmost and the second smallest of the four large peninsulas of Majatra. It extends for hundreds of km from the Solentian border in the northwest to Capo della Trinità in the furthest point at south-east.

It constitutes the continental portion of Istalia and politically and historically the is divided in the region Padagna to the north-west, Trivendito to the north-east and Mezzodiurno to the south.

The northern Trivendito is covered by the Nayar Range, a chain of mountains which surrounds the North, forming a natural border with Solentia. From the mountain extends a large hilly foothills area sculpted by millennia of rivers flowing. The southern Trivendito instead is a pleasant and rich plains, irrigated by rivers flowing from the mountains Nayar throughout the year. Much of southern Trivendito was once time covered by extensive forests, today is a large agricultural and industrial area, while to the west there are several large lakes.

The northern Padagna is similar to Trivendito, separated from Solentia by a mountain range too, the Mounts Alkhayl, which continue also to south-east along the coast (the northern part is often called Northern or Solentian Massif). However, as one moves south through Padagna, after a limited hilly foothills area, the lush plains surrounded by the Alkhayl become drier until it reaches the far south, occupied by the northern areas of the Great Central Depression, where extends the Pheykran desert, decidedly inhospitable exept for various oases and the northern rivers which flow into the Great Lakes, on the south-east at the border with Trivendito.

Mezzodiurno is like Padagna, divided between the extreme north and the north, occupied by the southern offshoots of the Great Basin and by semi-arid plains, and the much more hospitable southern portion. Semi-arid plains in fact going south rise gently to a plateau occupying the entire southern portion and which rises further along the south-west coast where ends the chain of the Mounts Alkhayl. Thanks to water courses coming from Alkhayl and humid currents from the south, both the west and the east coast of Mezzosiurno and the Southern Highlands are prosperous regions protected by the aridity of the central lands.

In the area where the common bourder of the three regions, there are four large lakes known as Lago Sovrano, Lago Firmamento, Lago dei Nomadi and Lago Inferiore.

The southern coasts of the Sarrentina Peninsula turn out to be the coldest areas, heavily influenced by the climate of the antarctic Perartic Ocean, specifically by the Antarctic cyclon, which brings large amounts of rain for most of the year, especially during the autumn and winter, with a fresh spring-summer season, here are registred the highest levels of Majatra rainfall.
The abundant southern rains because of Alkhayl and the Southern Plateau can not reach the inner region of the Central Great Depresion where the desert of Pheykran appears to be the result of the rainfall shadow of the southern highlands.
Trivendito in the southern plains has an extremely favorable climate and receives a moderate amount of rainfall during the year while the north is very wet in winter and spring, but it becomes mild in summer and autumn.
The Far North of both Trivendito and Padagna, occupied by the high mountain ranges of the North Massif and much more extensive Nayar Range make the weather cold and snowy and many valleys are occupied by vast glaciers.
Precisely the great glaciers of the North Massif make the central and northern regions of Padagna very similar, albeit drier, to those of Trivendito, protecting hilly regions that slope towards the south from the aridity of the rainfall shadow thanks of the mitigating effect of many water courses fed by major glacial masses that flow eastward flowing into the rivers of Trivendito or south-east by throwing himself in the Great Central Lakes, which as mentioned are other important surce of climate mitigation which restricts even more the Desert Pheykran (that laps the southern shores and south-west shore of the lakes).