The Seleyan Unon (SU) is a political and economic union of 9 Seleyan states. The Seleyan Union is home to just under 900 million people. The Treaty on Seleyan Union introduced a harmonization of the trade policies of its members, however, the SU does not have a single internal market. SU promotes friendly relations and fair policies between its members.

The population of the Seleyan Union is about 797 million people. It is one of the largest organizations in Terra when measured by population.

Members of the Union Assembly may form political groups made up of Assembly Members from different Member States. Currently the largest political group in the Assembly is the Seleyan Progressive Alliance. Following the 4616 formation of the Union Assembly, socialists and social democrats have the largest representation. Aldegar did not take up its 15 seats and they remain vacant (shown below in black).

The Union Assembly will be expanded to 135 members for the 4624 formation due to the accession of Baltusia in 4621. 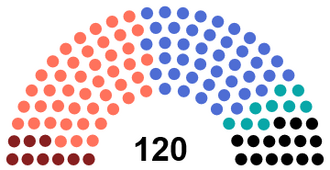 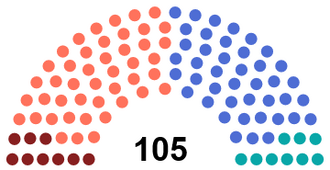 Although the Seleyan Union has not established a single market, its Member States conduct policies which are aimed at harmonising laws and regulations which facilitate the easy flow of capital, services, goods and at some extent flow of people across the territory of the Seleyan Union.

When measured by GDP, the Seleyan Union is the largest market in the world with GDP of 2.20 trillion LOD (2 199 710 573 LOD) which gives an average of 2.759 LOD per capita. The Seleyan Union is home to many major international companies and corporations, with the cities of Aldegaria, Clovisport and Brzansk serving as the main economic centers of the SU. 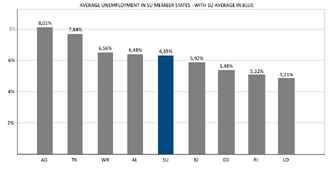 Retrieved from "https://particracy.fandom.com/wiki/Seleyan_Union?oldid=268811"
Community content is available under CC-BY-SA unless otherwise noted.