Suyu Llaqta, formally known as the Kingdom of Suyu Llaqta and also known as the Llaqta State is a sovereign state in eastern Dovani. Suyu Llaqta is bordered by Istapali to the west and New Englia to the northeast. After the dorvish military invasion of the nation and the subsequent 2 year long military rule of the dorvish armed forces the country was transformed into a Federation with the Presidential office having significantly less power then before and with parliament being the most important body of the state. Later, communist rebellions accross the country caused a breakdown of this government and the installation of a one party communist state. After 250 years of communist rule, the country saw a period of 5 years full of turmoil and eventually the overthrow of first the communist government and shortly after the first democratic government in 250 years. Suyu Llaqta was transformed into a Kingdom but was de-facto a military dictatorship starting from 5111. In 5117, 6 years after the kingdom was formed, the then king Baati I dismissed the government and started the process of democratization, resulting in the return of democracy that same year.

Suyu Llaqta takes its name from the ancient Llaqta Kingdom which existed in roughly the same area as the modern nation and which most Llaqta citizens trace their ancestry to.

Suyu Llaqta has been governed by a number of regimes since the 1st century.

For hundreds of years, the Llaqta Kingdom ruled most of the territory which no belongs to Suyu Llaqta. Most citizens of Suyu Llaqta trace their origins back to these early Llaqta peoples and many of their customs remain a prominent part of life in the country.

Suyu Llaqta was colonised by Greater Hulstria in 2462. The Colonial Affairs Act 2694 established the governance of Hulstria's colonies: an Imperial Commissioner presided over the entire Eastern Territories. In addition, a Regional Commissioner was appointed to oversee each of the thirty-eight specific regions. Present day Suyu Llaqta is composed of the former territories of Ost-Berge and Fernost Hulster. 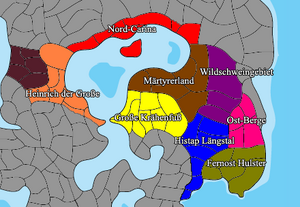 In 3394, prior to total independence, the Eastern Territories were granted a degree of self governance. During this period, a Viceroy was appointed to represent the Hulstiran Emperor in each colony. It was within the legislation establishing self governance that the existing territorial boundaries were drawn.

Independence was granted to the Eastern Territories under the provisions of Act of Decolonization. Despite the proclamation of the 'Republic of Suyu Llaqta', political freedoms were curtailed by the new regime and voting rights were extended only to landowners. Suyu Llaqta's human rights record was also criticised as the former colonisers continued to dominate the nation's governance.

When controversial President August Surmann attempted to reform the political system in 3845, he was deposed in a military putsch, led by General Timon Heydrich. Heydrich established a one-party state, known as the Second Republic of Suyu Llaqta, under his premiership. Although authoritarian, the second republic represented a significant increase in the standard of living for many citizens.

Following a second coup d'etat in 4038, the Third Republic was declared. For a while, Suyu Llaqta was governed (ostensibly) as a Presidential Republic, though the country was governed exclusively by the National People's Party. In 4206, this changed with the election of Coatl Lulling (Democratic Worker's Party). Lulling was re-elected twice but was detained by the national police force shortly into his third term.

Following Lulling's arrest, a provisional government was installed led by the Chief of the Armed Forces. The legislative body, the Council of Representatives, was dissolved and absolute legislative and executive power was granted to the Commander of the National Government Sumailli Paucar. In practice, much of this power was distributed between a team of 'Coordinators' tasked with overseeing certain policy areas.

In September 4217, a revolutionary communist group known as the the Republican Liberation League seized control of the Ecigues mine in the northern part of the country. With the support of the local Democratic Worker's Party, they began preparing for a further assault on the surrounding villages. Despite government reports to the contrary, the miners generally welcomed the militants and agreed to return to work in exchange for basic provisions of food, water and shelter.

Over the following decade, a full scale conflict began between the RLL and the newly created 'Fourth Republic of Suyu Llaqta', led by the State Affairs Commission. Both sides agreed to begin negotiating a peaceful resolution to the conflict in 4224.

Suyu Llaqta is one of the largest nations in Terra. It has a varied climate and geography. In the north and west, deserts are common, with a sparce population. The center of the country is home to a semi-arid climate, thanks in large part due to the Eromo river and its various offshoot rivers that run through the middle of the country. In here it is still hot, but larger populations reside here due to their more favourable and greener climate. The coast is home to a dry summer climate categorized by its hot summers but wet and mild winters. These are the most vertile and often called idylic regions of Suyu Llaqta, with the coastal regions also very appealing to tourists. It is also the most vertile and mild region in Suyu Llaqta, with most agricultural production coming from this region as well as its biggest population centers being located there.

The government of Suyu Llaqta is organized into a Unitary constitutional monarchy. Its Head of State is the Monarch of Suyu Llaqta which serves as a mostly ceremonial head of state. The monarch is mainly the symbol of national unity, having only very limited powers. These powers include appointing 100 peers to the House of Peers every 6 years, attending official state ceremonies, visits and head trade delegations and grant honours in the name of the state. The monarch holds one reserve power, the disbanding of all of parliament, but may only do so if requested by the Prime Minister or if a constitutional crisis is ongoing.

The Council of Ministers is the government of the Kingdom with all its ministers and ministries included. The Council is appointed by the Prime Minister but approved by the House of Representatives. The Council of Ministers is the only body with draft powers, drafting laws and sending them to parliament for approval. The different ministers all handle day to day affairs of their ministries and are tasked with implementing and enforcing national policy. The Prime Minister chairs the council, decides when it convenes and has to approve all council decisions.

Suyu Llaqta is divided into 10 Regions that all have a democratically elected Regional Council, Directly elected governor and limited authority to legislature their own matters. Regions may legislative local taxation, local infrastructure, determine brought zoning policy, maintain national law in their region, maintain security and oversee municipal councils financially, making sure they dont end up in deficit spending thats to high.

Municipalities are the last form of government and are elected every 4 years. They have a mayor that is elected in a direct election every 4 years as well and a municipal council. Municipalities can legislate local taxes, hand out build permits based on regional zoning laws, maintain local security and infrastructure and may legislate local subsidies. They also handle any tasks delegated to them by the national government and are already involved in social housing projects, with the national government providing funds for the municipalities to construct and maintain social housing.