Republic of Valruzia is the largest country on Terra (represented in the World Congress) by surface area with 1.93 million square kilometers and one of the most populous country (most populous in Seleya). Thanks to its relatively high level of urbanization and big numbers of city agglomerations it has a moderately sparse but at the same time extensive network of transport infrastructure.

Valruzia has approximately 1.1 million kilometers of roads. 53 thousand kilometers of those create a network of high-speed highways known in Valruzia as Autostrada, ann expressways known in Valruzia as Droga Eksrpresowa. The remaining part creates a system of Voivodeship, County and Municipality roads (val. Drogi Wojewódzkie, Powiatowe, Gminne). The railroad network of Valruzia has 39 thousand kilometers in length. The biggest airports in the country are: Nowogard Ignanski Airport and Brzansk - Olimpia Airport. The most important waterways are Libard and Luzyca river.

Although infrastructure in Valruzia remains on the relatively high level of development, the national government still has to face a big disparity in the transport infrastructure depending on the region, and invest heavily in the infrastructure sector with aim of improving the condition of roads and railroad in most rural areas, especially in Gryfit and Chynberg Voivodeships. 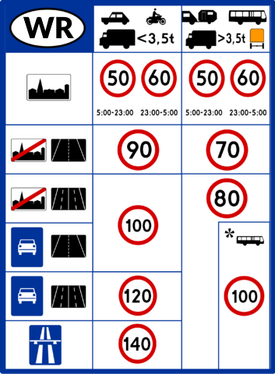 Valruza, thanks to its location, serves as an important transit route from the north of the Seleyan continent to its southern parts. The country is home to many important communication routes known colloquially as Transseleyan Routes (Szlaki Transselejskie). The national government manages the roads in the country through a specialized governmental agency Supreme Inspectorate of Road Infrastructure (Naczelny Inspektorat Infrastructure Drogowej, NIID).Despite the government's efforts to transfer much of the cargo traffic from the he roads to trains, still, majority of transport is done by roads.

As said above, Valruzia has approximately 1.1 million kilometers of roads. The national government implemented a simple road classes category:

The WKP Valruzian State Railway (WKP - Walruzyjskie Koleje Państwowe)is the major railway service and infrastructure operator. Although WKN is a joint stock company, and on legal terms it is treated as private company, the government of Valruzia, is the owner of all of the shares, so WKP can be called as state-owned company. Established in 4247, it is the largest operator of railway infrastructure and service provider in the region. It is de iure the manager of all the tracks in the country and can charge other operators for using railroads in Valruzia.

The WKP Valruzian State Railways accoridng to the staturory laws should be self-sufficent entity but as many of different business entites is has teright to file for subsidies from the National Economic Fund. The company is one of the smallest contributors of the fund and recives around 120 million pesos annually, which is used only for investments. The Ministry of Infrastructrue and Transport also invests in the WKN with 3.5 billion pesos reserved for investments and operational expenses of the WKN.

The WKP Valruzian State Railways provides short- and long-distance routes for its passengers. The operator upkeeps a wide range of inter-city connections as well as long international routes which are maintaned in cooperation with foreign state-owned or private railway operators.

One of the biggest issues of the railway in Valruzia is its relatively low density and (resulting from the low density) innability to meet 100% of customer demand. Currently there is a comprehensive public debate whether additional public funds should be transfered for constucting more dense railway. Proponents  say that this would allow for less congested higways and cities and would create numerous jobs. Opossers say that theere isanegative trend for inter-city railway transport and that people preffer to go by car or by plane which is simply faster.

Due to its large area, Valruzia has witnessed an increase in domestic passenger and cargo air transport. In recent years airlines providing flights on domestic routes began to be more competitive and is growing steadily. In 4291, 19% of distance travelled was by plane. On the other hand international air transport is heavily soldified within Valruzian market and due to its location Valruzia serves as a hub formany airlines in their intercoontinental, ultra long-haul routes.

Valruzia's largest airline, and at the sametime its flag-carrier, is the LOT Valruzian Airlines, which was established in 4247 with Establishment of the State Owned Airways WLL LOT Act. Despite its legal status and functioning as a private business entity, all of LOT's shares are owned by the government of Valruzia. LOT started its own regional - Homeconnect, and international airlines - Interconnect, as well as designated cargo airline - LOT Cargo. And all together those function under the name LOT Group.

Valruzia is also home to a numerous regional and international airlines such as, HelloAir, Super7 or Valair.

Nowogard Ignanski Airport is the largest airport in Valruzia, one of Seleya's major transportation hubs. Other important airports in Valruzia are: Brzansk - Olimpia Airport, Hel International Airport and Gryfitow - Topolin Airport. Valruzia features several others airport with scheduled passenger or cargo traffic, serving mainly domestic routes or routes within the north of Seleya.

Retrieved from "https://particracy.fandom.com/wiki/Transport_in_Valruzia?oldid=229018"
Community content is available under CC-BY-SA unless otherwise noted.