The Valruzian Aeronautics and Space Agency (VASA) (val.: Walruzyjska Agencja Aeronautyki i Przestrzeni Kosmicznej) is an agency of the Government of Valruzia responsible for management of all state-connected activity aimed at exploration of the space, the civilian space programme, as well as aeronautics and aerospace research in the Republic of Valruzia.

VASA was established in 4322 when the Sejm of the Republic of Valruzia enacted the Act on Establishment of the Valruzian Aeronautics and Space Agency. The agency commenced operation after the bill was signed by the then President of the Republic of Valruzia Marek Astor on April 17th 4322. The agency took over the responsibilities of smaller and more dispersed agencies which before 4322 were under the jurisdiction of Ministries of National Defense, Science and Technology and Trade and Industry. After the bill was signed and entered force all jurisdiction over the state's activity connected with space exploration, civilian space programme, commercial, communications and semi-military satellites was assigned to the Ministry of Science and Technology. The matter of military satellites remained under the joint jurisdiction of the Ministry of Science and Technology and the Ministry of National Defense.

Since 4322, most Valruzian space exploration efforts have been led by VASA which became one of the best funded governmental agencies in Valruzia with the annual budget of approximately 15 billion Valruzian pesos. VASA is headquartered in Nowogard and has two additional operational headquarters in Brzansk and Gryfitow where VASA's two spaceports/cosmodromes are located. The agency closely cooperates with the New Endralonian space agency NEŰI-ASK. Both companies use spaceports in Valruzia and work jointly on rocket designs and commercial satellites.

VASA's budget has been regularly expanded and cut accordingly to the policy of the contemporary government. The first VASA's budget in 4322 when it was launched was just 998 million VPO. It was quickly expanded with the 4323 budget almost doubled to 1.8 billion VPO. In later years, especially in the second half of the 20s. the budget for VASA became one of the Party of National Coalition's government priorities with the drastic annual increase of the VASA budget, which in 4330 reached its all times high with 44 billion worth of funds and subsidies being pumped into VASA from five different ministries (internal affairs, defense, infrastructure & transport, education & culture, and science & technology), and was the result of the works of the agency to establish Valruzia's own space-based navigation system called VALNAS (Valruzian Navigation System). The period between 4330 and 4345 saw the gradual decrease in the VASA budget which in 4345 was set at 8.9 billion VPO. In later years the Council of Ministers has decided to once again pump additional funds into VASA with its budget rising from 8.9 bn VPO in 4345 to 24.3 bn VPO in 4353. Most of the funds were invested into space exploration and production of geostationary satellites (Valruzia had 13 geostationary satellites in 4362: 10 communications satellite, 3 military satellites). After the PKN-led government lost the majority in the Sejm and the Socialists and Centrists took the majority, the Government drastically decreased VASA's budget which was drained to just 7.7 bn VPO in 4354 and 6.1 bn VPO in 4355. VASA's future was put in question and the initial plans to dismantle the agency was discussed, but the political comeback of right-wing parties secured the fate of VASA with another increase of its budget which since 4356 were set at around 15 bn VPO annually. The unique way in which the budget of VASA is created gives the government a lot of elasticity on the shape of the agency's budget and gives Ministers free hand to designate funds which are supposed to go to VASA's budget. Since around 4892 VASA's budget has been kept at around 40 billion VPO annually.

VASA can freely divide the assigned budget to projects and research. The decision is made by the board of directors of VASA and since 4346 the budget has been divided according to a fixed plan. According to the VASA budgetary scheme, agency's assigned budget is divided in the following manner: 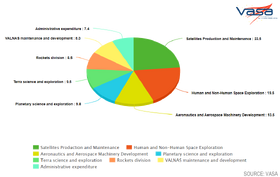 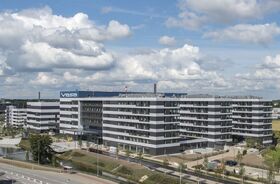 Currently, VASA maintains several facilities located throughout Valruzia. VASA' facilities research & development, construction, and communications centers to help the agency in the projects and mission management processes. VASA best-known facilities are located in three major cities in Valruzia: Nowogard where the agency's headquarters are located, Brzansk where most of the equipment for the agency is produced, and one of the two spaceports is located, and Gryfitow where VASA's second and largest spaceport is located.

VASA facilities throughout Valruzia are:

VALNAS or Valruzian Navigation System was the first major project of the agency. In 4325 President Marek Astor set a goal to the Ministry of Science and Technology to, in cooperation with the Ministry of National Defense develop a satellite-based navigation system which would cover the territory of Valruzia and Seleyan Continent. Astor wanted the new system to be more precise than the existing ones and to provide the independent system which would allow for geolocalization and providing information to the National Forces of Defense of Valruzia. Ministry of Science and Technology started works on the project which was initially called "Central Geolocalization and Time Information Sharing System" but later changed to "Valruzian Navigation System", hence the short name VALNAS. The system works thanks to 3 military and 2 civilian communications geostationary satellites which were put on the geostationary orbit above Valruzia. The system combines the geolocalization with a simple triangulation technique. The satellites were put into orbit between 4327 and 4331. All are maintained by VASA.