listen), is a federal presidential republic in Northern Seleya. It is bordered by Likatonia and Lodamun to the north, Baltusia to the east, Tukarali to the south, and the South Ocean to the west. Due to its shape, it is sometimes referred to as "the Hexagon of Seleya". It is part of the Commonwealth of Keymon and Valruzia.

Valruzia is the largest state in Seleya with an area of 1,930,500 km² (745 370 sq mi), and it is also the state with the largest metropolitan territory in Terra. For a long period of time, the nation has been a minor power, but in 43rd and 44th centuries, Valruzia made significant progress and became a country with a strong cultural, economic, military, and political influence in Seleya and around the world. Valruzia consistently pursues a policy of increasing spending on its national defense and around 4340 it entered the top ten of Terran states with the highest expenditures on military and national defense.

Valruzia is a member of the Seleyan Union, North Seleyan Economic Community and the founding member of the Council of Seleya. Valruzia is a member of the Eight Economies. It is home to numerous non-governmental agencies monitoring the situation of human rights across Terra, the most recognizable being the Gloria Iustitia. In the 44th century, Valruzia became one of the strongest supporters of Seleyan integration and encourages other members of the SU to commit to the process. Together with Baltusia the Valruzian Government established the Alboro Agreement which allowed the citizens of countries within the Seleyan Union to travel freely on the territory of the Union. 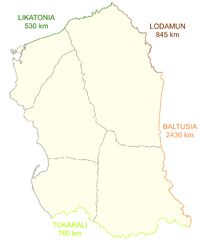 Valruzia is located in the north-western part of Seleya, with Likatonia bordering to the north, Lodamun to the north-east, Baltusia to the east, and Tukarali to the south. Valruzia is bordered with the South Ocean. It is the biggest country by area in the world. It shares 4,565 kilometers of borders with neighborhood countries:

Elevation ranges from Kagan Range in the eastern part (highest point: Plarix Peak (val.: Plarys - 4,230 meters) to the shores of the South Ocean (Basin of Valruzia) in the west.

For most of its Constitution, the Republic of Valruzia has been a federal, parliamentary republic with the parliamentary-cabinet system. Its constitution also implemented a firm separation of power with three basic branches: legislative, executive, and judiciary. The law is enforced by numerous governmental agencies like the General Prosecutor's Office. Standard law is enforced by local law enforcement agencies. Federal law is enforced by specialized federal agencies. Standard police duties are performed by County Szeryfs Offices and City Police Departments.But in 49th century a country moved towards a presidential system with a large amount of executive power vested in the hands of the President who in the result of the 4805 Constitutional Referendum became the Head of State.

See also: Sejm of the Republic of Valruzia

The legislative branch of power in Valruzia is represented by a unicameral parliament with one chamber: Sejm of the Republic of Valruzia with 230 deputies referred to as poseł or posłanka. Members of the Sejm are elected every six years in the universal, equal, direct, proportional, and anonymous election. Its main task is to enact statutory and constitutional laws as well as budget acts and ratification of international treaties. The Sejm may shorten its term with a simple majority of at least half of the legislative seats.

See also: President of the Republic of Valruzia, Prime Minister of Valruzia (former), Council of Ministers of Valruzia

People in Valruzia can enjoy wide variety of freedoms, including freedom of political beliefs which implicates the freedom to gather and create various political parties. 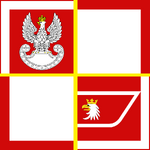 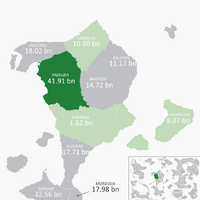 Thanks to PKN-led government's reforms in 43rd and 44th-century Valruzian National Forces of Defense became one of the best equipped and strongest militaries in Seleya with the annual budget for the national defense increased from the level of 26 billion VPO to 315 billion (300 bn - government, 15 bn - NEF), making Valruzia the country with the largest military expenditure on the continent.

Currently military budget of the Republic of Valruzia is among the highest on Terra. The government of Valruzia constantly expands the military budget which now is at its highest levels in the history of the country with VPO 275 billion being directed to national defense with additional VPO 25 billion from the National Economic Fund for new investments within the NSO. 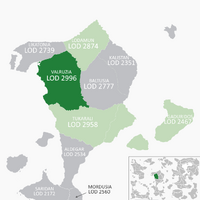 The economy of Valruzia can be classified as an example of a social market economy, where the State reserves a relatively large range of mechanisms and tools used to stimulate the economy and react to negative effects of business cycles. Since, the country's reformation in 4244, and the establishment of the Republic, Valruzia's economy saw a constant and sustainable growth with increasing skills of the overall workforce and increasing capital stock. Thanks to the comprehensive reforms of the legal system and establishment of numerous agencies responsible for fighting corruption like the Police, or Customs Office, Valruzia managed to greatly limit corruption which under the present penal code is one of most severely punished financial crimes.

Currently, it is one of Seleya's largest exporter of goods and has one of the largest economies on the continent. The services sector constitutes about 65% of the total GDP, with the industry at 31.9% and agriculture at 3.9%. With the average unemployment of around 6-6.5%, Valruzia is one of the countries with the smallest unemployment on the continents. At the beginning of the 44th century, Valruzia became one of Terra's leading markets in the aerospace industry with Reglair Aircraft Factory moving from Dorvik to Valruzia. The beginning of the century saw also a significant boom in the automotive industry, which combined with high demand for all types of vehicles transformed Valruzia into the largest and one of the leading automotive markets in Terra. Companies like BÖNNING Car Factory (which later turned into BÖNNING Group with major control over Valruzian BÖNNING, and Aldurian Avignon) or Brzansk Automotive Factory (with BFS and its premium brand FSM) are currently holding the position of leaders in the automotive industry on both the continent and global markets. It is estimated that approximately 22 million cars made in Valruzia are sold every year around Terra (3 million in Valruzia).

Valruzia is the world's largest energy consumer with an average of 950-1000 terawatt-hours consumed annually. Despite the government's efforts of increasing the share of nuclear energy, it still accounts just for 34.5% of overall energy production, 54% of the energy produced was created from fossil fuels (33% coal, 21% natural gas), and 11.5% were created from renewable sources. There are two major producers of energy in Valruzia: Enerwal - operator of conventional power plants and those using renewable sources of energy, and Walatom - operator of nuclear power plants. Both are state-owned enterprises. Currently, there are 15 nuclear power plants in Valruzia with 4 in process of phasing out and 5 additional under construction, the most significant are: Brzansk Nuclear Power Plant (with 5 VHTR reactors - total output: 9.500 MW) and North Chynberg Nuclear Power Plant (with 4 VHTR reactors - total output: 8.100 MW). The biggest conventional power plants are Dabik-Sepolno Power Station (with 14 power generating blocks - 390 MW each) and Pastarnia Power Plant (with 12 power generating blocks - 390 MW each). In terms of renewable sources Valruzia is known for its small, but efficient hydroelectric power plants located in the Chynberg Voivodeship. In 4279 construction of Skawertow Solar Power Plant began in Valusian Voivodeship. It is estimated that the power plant will have 34 units generating 25 MW each.

Valruzia has a relatively extensive road network with 1.1 million kilometers of roads, with over 53 thousand of which create a nationwide high-velocity roads network, known in Valruzia as Autostrada. Roads in Valruzia are classified according to their purpose and the authority under whose jurisdiction they are. Currently, there are 5 types of roads in Valruzia: Highways, Expressways, Voivodeship Roads, Couty Roads, and Municipality Roads.

Valruzia also has 39 thousand kilometers of railroads which, considering its relatively big territory, is quite little. However, the railroads in Valruzia are prepared to serve high-velocity trains and provide access to the biggest cities.

There are 15 major airports in Valruzia which have service commercial routes to and out of. Biggest is Nowogard Ignanski Airport followed by Brzansk - Olimpia Airport] which serves as the nation's main international airports. Valruzia in recent decades saw a great surge of domestic air travel. In order to meet the demand, the LOT Valruzian Airlines called to life its subsidiary Homeconnect which upkeeps routes between all medium and big-sized airports in the country.

Valruzia, with 43.5 million inhabitants, is the 40th largest country by population, and 10th most populous in Seleya. It has a population density of 23 inhabitants per square kilometer. Historically, Valruzia consists of many different cultures, languages, and religions, however with time a single Valruzian culture and identity were formed. The population of Valruzia became nearly completely ethnically homogeneous. Over 90% of the population identifies as ethnically Valruzian, even though only 87% are Valruzian by origin. Ruzians, Valonians, and Zumans form the largest ethnic minorities in Valruzia. Likatonians, Baltusians and Dundorfians form up the largest national minorities in the Republic.

Valruzia observes the following national holidays that are set by the State:

The following are holidays that are observed by the general population, but are not strictly holidays as time off work is rarely given.

Although Valruzia is a secularized nation, it does observe several traditional holidays that are derived from religious calendars. These holidays are considered statutory holidays. They are as follows: